Credit unions: A model for leading in difficult times 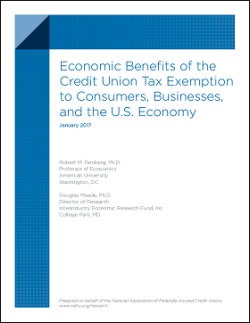 It is easy to lead when things are going well. However, when situations turn sour, leadership can become messy if you donÃ¢ÂÂt maintain the correct focus.

The credit union industry Ã¢ÂÂ a vital component of the nationÃ¢ÂÂs economy and now serving more than 106 million members Ã¢ÂÂ knows how to lead in a difficult environment, and how to lead well. This industry is constantly under attack, facing everything from overly burdensome regulations to the ongoing assault on its federally tax-exempt status. Despite these attacks, the industry continues to strengthen and further prove its mettle.

The credit union exemption has been in the crosshairs of the banking industry since its inception. NAFCU, seeking to preserve an environment where credit unions can thrive, this week issued an independent study showing the benefits to U.S. consumers from credit unionsÃ¢ÂÂ tax-exempt status. That economic benefit comes in at $16 billion per year, or $159 billion over the 10-year period the study examined.

NAFCU is sharing the results of this study with members of Congress, and I encourage all credit unions to use it in their own discussions with their senators and representatives. Meanwhile, I also encourage all credit union leaders to take a few moments to read some thoughts from best-selling author Kevin Daum on how to lead through challenging times. In brief, his five tips are:

The nationÃ¢ÂÂs credit unions do a fantastic job of providing financial services to their members despite the current environment. As we work in this new year filled with unknowns, and under a new presidential administration, I hope NAFCUÃ¢ÂÂs tax study gives credit union leaders a boost of confidence as you continue to offer the very best in financial services to your members. Follow me on Twitter (@BDanBerger).