How to help employees be awesome 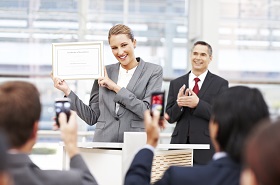 You may or may not say the word Ã¢ÂÂawesomeÃ¢ÂÂ very often out loud Ã¢ÂÂ but I hope you think your employees are awesome. I certainly think my team is awesome. But it turns out that saying it out loud Ã¢ÂÂ telling your team that you believe in them and think they are awesome Ã¢ÂÂ can make them do even more awesome work.

Ã¢ÂÂThis is a particularly alarming possibility when you consider the seemingly reasonable motives of those who gave consistently lower ratings,Ã¢ÂÂ Zenger and Folkman wrote. Ã¢ÂÂWe frequently heard them say something like, Ã¢ÂÂI want my people to get the message that I have high expectations.Ã¢ÂÂ Those who gave high marks to their people also had high expectations, but they were more focused on sending the message that they had confidence in their people. They truly felt that they had selected the best people for those positions, and they expected them to succeed.Ã¢ÂÂ

How we act and what we say as leaders makes a difference. ItÃ¢ÂÂs good to remember that high expectations are better communicated through positive reinforcement rather than negative feedback.