Leadership lessons from the pope 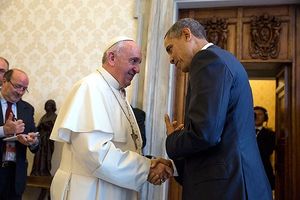 Since assuming the papacy in 2013, Pope Francis has carved out a distinctive leadership style. Last week, he visited New York, Philadelphia and Washington, D.C., and made appearances before the United Nations and Congress where he reflected upon the changing tone of the Catholic Church and ideas about leadership. Though IÃ¢ÂÂm not Catholic, many folks of all faiths call him the Ã¢ÂÂpeopleÃ¢ÂÂs popeÃ¢ÂÂ Ã¢ÂÂ and given the way he conducts himself, it is obvious why.

My friend, Tom Connelly, shared a Fast Company article with me that presents five leadership lessons that business leaders, politicians Ã¢ÂÂ all types of leaders Ã¢ÂÂ might learn from Pope Francis.

ItÃ¢ÂÂs an insightful article, and I wanted to share it with you. Here are the five lessons it notes: