Now is the time to say ‘thank you’ 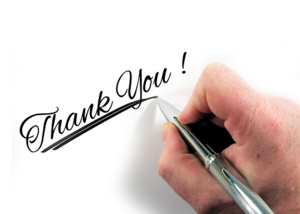 First off, IÃ¢ÂÂd like to wish you a Merry Christmas and Happy Holidays!

Second, I want to spend a moment on the importance of saying Ã¢ÂÂthank youÃ¢ÂÂ to those who work for you.

Lolly Daskal, president and CEO of Lead from Within, cited a study discussed on Inc.com that showed more than one-third of workers felt unappreciated and were looking for new jobs. She said there was a direct connection in this study between workersÃ¢ÂÂ intent to look for a new job and the level of recognition they received at work.

With this in mind, she suggests several simple ways to say thank you to those who work for you:

- Be consistent. Saying thanks regularly can translate into people working harder, she says.

- Expand your thanks. A number of talented, hardworking members of your team might already receive a lot of praise, she writes. Ã¢ÂÂInclude team members who get less recognition; it might be that a little appreciation is all that they need to flourish,Ã¢ÂÂ she says.

- Release dopamine. Daskal says hearing something we like causes a chemical reaction in our brains Ã¢ÂÂ Ã¢ÂÂa burst of dopamineÃ¢ÂÂ Ã¢ÂÂ that is associated with feelings of joy and satisfaction.

During this holiday season, say Ã¢ÂÂthank youÃ¢ÂÂ to your hardworking staff. A staff that knows it is appreciated is more motivated and engaged Ã¢ÂÂ a great benefit to you and your organization.