Stand on fact and principle – no matter the circumstances 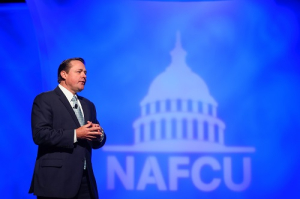 As a leader, sometimes your values and stances - even when based on fact and principle - aren't always the most popular or understood.

Forbes' Amy Rees Anderson puts it this way: "True leaders know who they are and what they stand for. They know their values and the rules they will abide by, regardless of the circumstances they face."

She goes on to add that true leaders also "take all the facts into account, keeping a long-term view in their approach, with the desire that any fixes they put in place today will be to the benefit of the organization and the people both now and in the future."

I couldn't say it any better myself.

This summarizes exactly why NAFCU has taken the position it has on the NCUA's proposal to close the Temporary Corporate Credit Union Stabilization Fund (TCCUSF). We stand on the fact that credit unions receiving all their money back from this fund will better benefit the industry than if they were to just receive a small share, as is currently proposed.

In an email to association member credit unions this week, NAFCU Board Chair Richard L. Harris, president and CEO of Caltech Employees Federal Credit Union, reiterated NAFCU's stance on this proposal. I thought he summed up our position well, and I wanted to share his points, in his words, with you:

While a complex issue, I, the NAFCU Board of Directors and fellow member credit unions, have no doubt that we are standing on fact and principle. NAFCU has always stood for the betterment of credit unions and the industry - we've done this for 50 years and will continue to do so now and well into the future.