On Monday, the CFPB finalized amendments to its definition of small creditors and rural or underserved areas under Regulation Z. The final rule goes into effect on January 1, 2016 and while the rule may provide some credit unions with regulatory relief, there are some concerns relating to the rule's treatment of affiliate assets (i.e. CUSOs). Here is a high-level overview of the rule.

Small Creditors. First, keep in mind that there are three provisions in Regulation Z which contain exemptions for small creditors:

Currently, under section 1026.35(b), to qualify for small creditor status, a credit union must meet a four-part test. The final rule amends the first three parts, here is a summary of the amended test:

While the CFPB acknowledged concerns relating to CUSOs with regard to the asset size threshold calculation, the bureau declined to adopt any carve out that acknowledges that credit unions and CUSOs are distinct from the kinds of affiliate and subsidiary relationships that other kinds of financial institutions utilize. Here's an excerpt from page 34 of the rule's Preamble:

While credit unions in their comments expressed concern about the impact of the proposal on credit unions affiliated with CUSOs, under the proposal only the assets of affiliates that regularly extended covered transactions are counted toward the creditor's asset limit. As adopted under the Bureau's final rule, therefore, only the assets of CUSOs that meet the definition of affiliate in Regulation Z (meeting the control test under the Bank Holding Company Act) and that regularly extend covered transactions during the applicable period will be counted toward the asset limit. The Bureau is not excluding CUSOs from possible treatment as affiliates because it remains concerned that a credit union could, under the current asset limit calculation, enter into a relationship with a CUSO or CUSOs to create a large entity that would be eligible for the special provisions and exemptions accorded small creditor status. The Bureau also notes that 1026.32(b)(5) and its definition of affiliate references the Bank Holding Company Act only for the purposes of how control is determined under that Act, which is applicable to the determination of affiliate under Regulation Z regardless of the applicability of the Act to credit unions.

To which I thought: 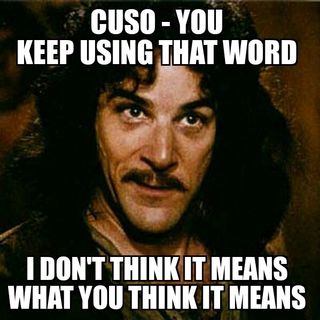 Rural or Under-served Areas. For a credit union to be deemed a small creditor, in the preceding calendar year, the credit union must have originated more than 50 percent of its first lien mortgages in counties that are determined to be "rural" or "under-served." The final rule, among other things, amends the rural definition by substituting the word "area" for "counties" in the current rule. This change would include all census blocks in order to account for additional communities that are rural by Census standards. To put this into perspective, there are only about 3,000 counties in the US, but 11 million different census blocks that are designated as either urban or rural. The final rule takes a more granular approach than the existing standard.  It is also worth noting that the final rule changes the current three year look back period used to determine whether the rural and under-served test is met to a one year look back.

Again, this is a high-level summary, there are more nuances to these changes that are worth reviewing in full. For more details on this final rule, NAFCU will provide members with a Final Regulation summarizing the changes in the next couple of weeks.