Home Blogs & Publications Musings from the CU Suite Why aren't there fireworks tonight?

Why aren't there fireworks tonight?

I'm currently in Tennessee on Vacation. A little Dollywood. A little Smoky Mountain National Park.  And of course, fireworks.  I want to see an awesome display of fireworks.

July 4th marks a fantastic moment in history. A group of individuals came together to sign a document that has shaped history throughout the centuries.

We hold these truths to be self-evident, that all men are created equal, that they are endowed by their Creator with certain unalienable Rights, that among these are Life, Liberty and the pursuit of Happiness. That to secure these rights, Governments are instituted among Men, deriving their just powers from the consent of the governed,  That whenever any Form of Government becomes destructive of these ends, it is the Right of the People to alter or to abolish it, and to institute new Government, laying its foundation on such principles and organizing its powers in such form, as to them shall seem most likely to effect their Safety and Happiness.

We celebrate the document and the bravery of our founding fathers. 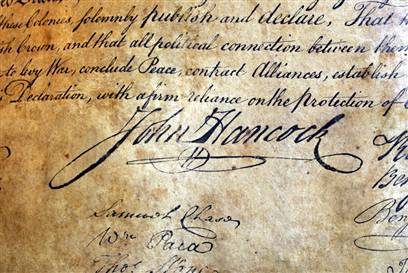 While we celebrate the signing of the document, the real work was done before.

I read this recently, and it was something I hadn't seen before.

As the news poured in that the British troop strength was growing, Lee and Adams took the next step. On Friday June 7, Lee made the following resolution:

"...That these United Colonies are, and of a right ought to be, free and independent states, that they are absolved from all allegiance to the British Crown, and that all political connection between them and the state of Great Britain is, and ought to be, totally dissolved."

In the debate that followed, there were many who claimed that the Congress should wait to hear from the people (!) before taking such a radical step. Others, such as Adams, Lee, and Virginian George Wythe, argued that the people were waiting for leadership, which the Congress must show. It was clear by that time, however, that the pro-independence grouping was ahead, and a Committee of Five, consisting of Thomas Jefferson, John Adams, Roger Sherman, Robert Livingston, and Benjamin Franklin, was appointed to draft a "declaration of independence," which was scheduled to be voted on, on July 1, 1776.Â (Emphasis added.)

Oh, to be a fly on the wall during that debate! There was logic on both sides, surely. Speaking more than 200 years after the fact, I'm glad they pushed forward. I'm guessing you are as well.

So as I sit and chat with my family tonight, I may very well light a sparkler or two in honor of the process.

Sure, July 4th gets the glory - but the hard work was done before. Travel. Negotiation. Bravery. Compromise.  Leadership.

Have a wonderful 4th, everyone!