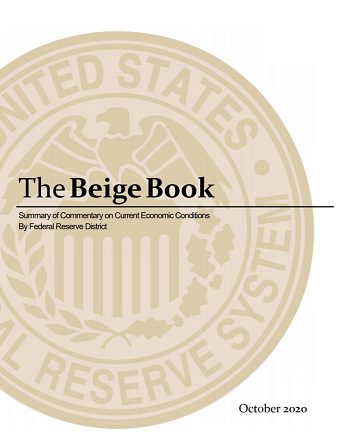 The Federal Reserve's Beige Book released Wednesday reflected a continued increase in economic activity in all districts; however, the pace of the growth is still characterized as slight to modest. In addition, the Beige Book noted that overall outlook expressed by the district contacts remains generally optimistic, with a considerable degree of uncertainty remaining.

The Beige Book report was based on information collected on or before Oct. 9.

"The Fed’s latest Beige Book confirms several trends that NAFCU and others have emphasized: strong mortgage demand, stable auto loan demand, and waning consumer spending," said Curt Long, NAFCU's chief economist and vice president of research. "Interestingly, the report describes labor markets as "tight" in most districts, and attributes that to the exit of many workers from the labor force due to health worries and the absence of in-person school and daycare services."

Other notable insights from the latest Beige Book include: