Close
Home Newsroom CUs: How does overdraft rule impact operations?

CUs: How does overdraft rule impact operations? 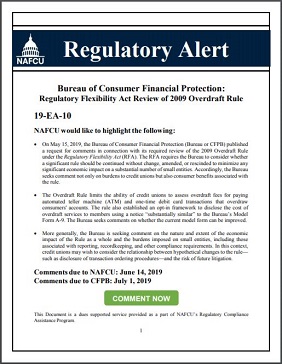 NAFCU sent a Regulatory Alert to member credit unions Wednesday requesting feedback on the overdraft rule as the CFPB reviews it under the Regulatory Flexibility Act (RFA). Prior to the Regulatory Alert, NAFCU's Carrie Hunt sent an email explaining what the bureau's request for information (RFI) means for the industry.

As NAFCU gathers feedback to provide the CFPB on the rule, it asks credit unions:

Member credit unions can submit feedback through NAFCU's Regulatory Alert until June 14; comments are due to the CFPB July 1.