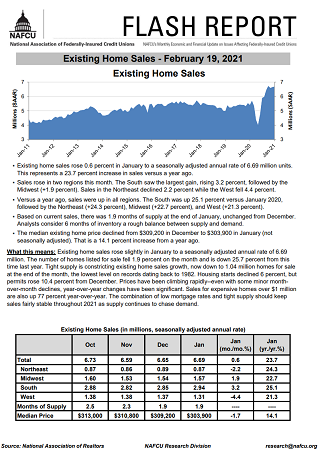 Existing-home sales rose 0.6 percent in January to a seasonally-adjusted rate of 6.69 million units, representing a 23.7 percent increase in sales versus a year ago. However, in a new Macro Data Flash report, NAFCU's Curt Long noted tight supply is constricting existing-home sales growth as supply is now down to 1.04 million homes for sale and at its lowest level on record dating back to 1982.

"Prices have been climbing rapidly – even with some minor month-over-month declines, year-over-year changes have been significant," said Long, NAFCU's chief economist and vice president of research. "Sales for expensive homes over $1 million are also up 77 percent year-over-year.

"The combination of low mortgage rates and tight supply should keep sales fairly stable throughout 2021 as supply continues to chase demand," concluded Long

Sales rose in two regions in January. The South saw the largest gain, rising 3.2 percent, followed by the Midwest (+1.9 percent). Sales in the Northeast declined 2.2 percent, while the West fell 4.4 percent. Versus a year ago, sales were up in all regions over the month.

The median existing-home price declined from $309,200 in December to $303,900 in January (not seasonally-adjusted), representing a 14.1 percent increase from the median price a year ago.