How should NCUA address capital concerns? 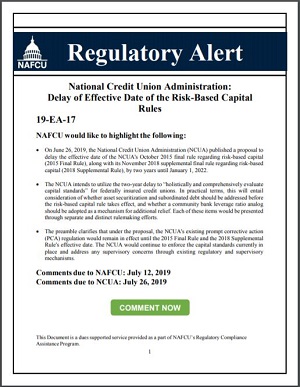 The NCUA has proposed delaying its risk-based capital (RBC) rule by two additional years – to Jan. 1, 2022 – and plans to "holistically and comprehensively evaluate capital standards" for federally insured credit unions during that time. NAFCU has led efforts to advance concerns from the industry and now seeks credit unions' feedback on how the NCUA should address and prioritize various issues as it evaluates the rule.

In a Regulatory Alert, NAFCU explains that the NCUA's review of the rule will consider whether asset securitization and subordinated debt should be addressed before the RBC rule takes effect, and whether a community bank leverage ratio analog should be adopted as a mechanism for additional relief.

Credit unions can submit feedback to NAFCU through its Regulatory Alert until July 12; comments on the proposal are due to the NCUA July 26.