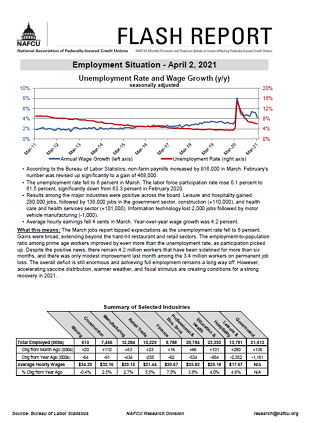 “The March jobs report topped expectations as the unemployment rate fell to 6 percent,” said Long. “Gains were broad, extending beyond the hard-hit restaurant and retail sectors. The employment-to-population ratio among prime age workers improved by even more than the unemployment rate, as participation picked up.

“Despite the positive news, there remain 4.2 million workers that have been sidelined for more than six months, and there was only modest improvement last month among the 3.4 million workers on permanent job loss,” Long added.

Of note, the February non-farm payrolls rate was revised up significantly to a gain of 468,000.

Average hourly earnings fell 4 cents in March, with year-over-year growth at 4.2 percent. The labor force participation rate rose 0.1 percent to 61.5 percent, significantly down from 63.3 percent in February of 2020.

Results among the major industries were positive across the board. Leisure and hospitality gained 280,000 jobs, followed by 136,000 jobs in the government sector, construction (+110,00), and health care and health services sector (+101,000). Information technology lost 2,000 jobs followed by motor vehicle manufacturing (-1,000).

“The overall deficit is still enormous and achieving full employment remains a long way off,” concluded Long. “However, accelerating vaccine distribution, warmer weather, and fiscal stimulus are creating conditions for a strong recovery in 2021.”

A Death in the Family: Working with Deceased Accounts

April 20, 2021 Add to Calendar 2021-04-20 14:00:00 2021-04-20 14:00:00 Driving Auto Loan Success: 3 Risk Challenges Credit Unions Are Facing About the Webinar  The auto industry continues to show signs of growth and opportunity even through the pandemic. But new risks have also emerged in the last year. During this webinar we'll explore the latest trends and future prospects in the auto market, the risks you need to be aware of, and how to update your strategy for growth. We'll discuss how your credit union can get in the best position possible to monitor and mitigate future risk.  Key Takeaways:  How risk management changed in the face of a pandemic Strategies to anticipate and prepare for risk vulnerabilities and exposure Practical tactics for credit unions to implement in 2021 Watch the Webinar On-Demand Web NAFCU digital@nafcu.org America/New_York public