NAFCU breaks down subordinated debt rule, impact on CUs in Final Reg 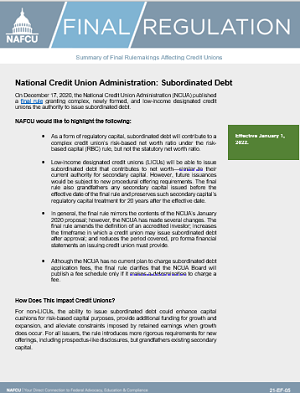 The association generally supported the proposed rule and some of the NAFCU-sought changes were made in the final version; however, the final rule does not adopt more simplified procedural requirements for the application and offering process.

For more on the NCUA's final rule, including a section-by-section analysis, read the Final Regulation. The rule will take effect Jan. 1, 2022.

NAFCU will continue to work to ensure that this rule does not increase regulatory burdens as it provides increased access to capital for credit unions.

January 26, 2021 Add to Calendar 2021-01-26 14:00:00 2021-01-26 14:00:00 Preparing Your Board for the Coming Decade About the Webinar The average board member is now in the midst of, at least, their third major governance challenge. Most board members today played critical roles during the Great Recession, have overseen a change in CEOs, and now find themselves navigating an increasingly complex and unpredictable confluence of external variables. The potential role and capability of boards in the 2020s will undoubtedly be informed by the last ten years of governance practices.  Many credit unions are preparing for a continued need to evolve their governance practices to meet the future needs of their more strategically capable organization. The pace of change will continue, one way or another. During this webinar, we will outline how several credit unions are preparing themselves today for the required governing role tomorrow.  Who should attend: Board members Board Chairs CEOs Watch the Webinar On-Demand Web NAFCU digital@nafcu.org America/New_York public

Preparing Your Board for the Coming Decade

January 22, 2021 Add to Calendar 2021-01-22 14:00:00 2021-01-22 14:00:00 Paycheck Protection Program - What Credit Unions Need to Know About Round 3 This webinar will provide a detailed overview of all of the changes to the Paycheck Protection Program (PPP) as a result of the Economic Aid Act and the two new interim final rules issued by the Small Business Administration (SBA) on January 6, 2020. We will discuss key issues to consider when originating first time and second draw PPP loans, as well as the corresponding lender obligations. There will also be a discussion on how to handle requests to increase existing PPP loans as a result in changes to the rules and how to properly document loan increases. Finally, there will be a brief Q&A session at the end so that you can pose your most pressing questions. Key Takeaways Review changes to the PPP rules Discuss Second Draw PPP Loans Understand PPP Loan Increases Register Now For On-Demand AccessRegistration is complimentary, but you must register to attend.One registration gives your entire credit union access to the on-demand recording until January 22, 2022.Already registered? Go to the Online Training Center to view live. Who Should Attend? NAFCU Certified Risk Managers (NCRMs) NAFCU Certified Compliance Officers (NCCOs) Presidents and Chief Executive Officers Chief Lending Officers Chief Financial Officers Lending and finance staff Risk titles Compliance and risk staff Education Credits NCRMs will receive 1.5 CEUs for participating in this webinar. NCCOs will receive 1.5 CEUs for participating in this webinar. CPA credit information is below; recommended 1.5 CPE credits. CPA Certification Credit Information Reviewer: Josie Collins, Associate Director of Education, NAFCU Learning Objectives: Review changes to the PPP rules. Discuss Second Draw PPP Loans. Understand PPP Loan Increases. Program Level: Basic Prerequisites Needed: None Advance Preparation Needed: None Delivery Method: Group Internet-Based Recommended CPE Credits: 1.5 credits Recommended Field of Study: Regulatory Ethics National Association of Federal Credit Unions (NAFCU) is registered with the National Association of State Boards of Accountancy (NASBA) as a sponsor of continuing professional education on the National Registry of CPE Sponsors. Learn more. About Our Webinars Our webinars are streamed live from NAFCU headquarters near Washington, D.C. Your audio/video feed of the presenters includes presentation slides and downloadable handouts. You can easily submit your questions to the presenters at any time during the live broadcast, with no dialing over the phone! The audio and video stream directly through your computer. Web NAFCU digital@nafcu.org America/New_York public