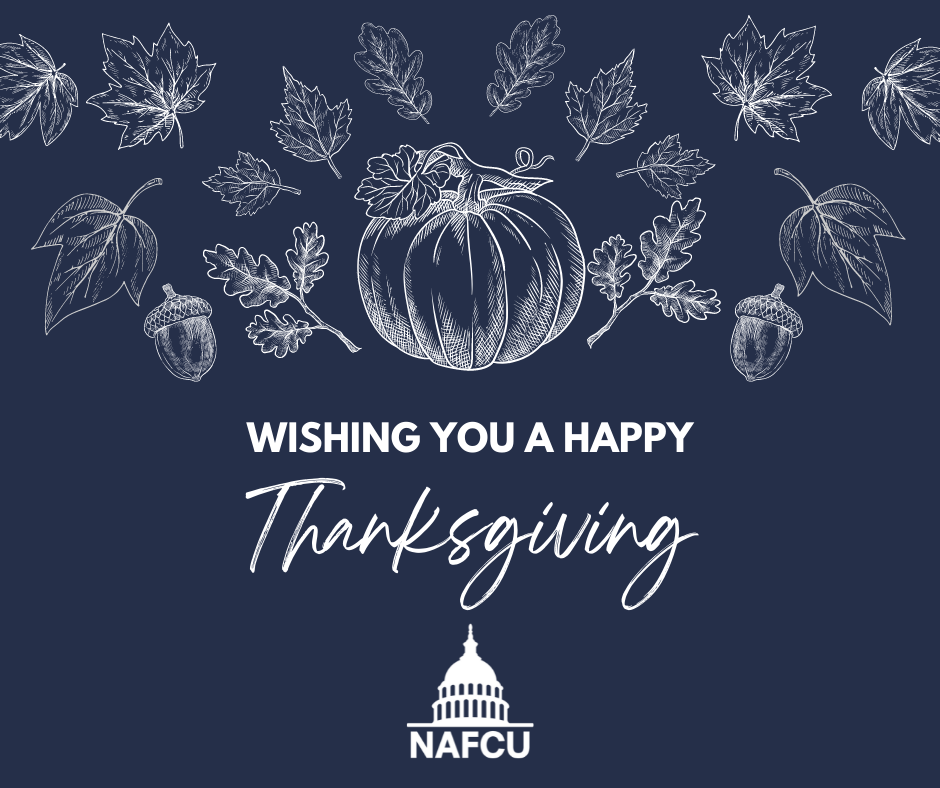 NAFCU’s office will be closed tomorrow through Friday in observance of the Thanksgiving holiday; however, members will still have access to the association’s website for the resources and regulatory and legislative updates on key issue areas, including the proposed IRS reporting requirement and the proposal to grant the Small Business Administration's (SBA) explicit lending authority. NAFCU’s offices will reopen Monday, Nov. 29.

Here are a few recent updates from NAFCU to be aware of:

Share your feedback on NCUA’s draft budget: The NCUA last week released its proposed budget for 2022-2023, which revealed a 1.2 percent increase compared to the 2021 budget. Of note, the agency proposed an increase to its travel budget by $8.5 million, or 69.7 percent, for a total budget of $20.8 million. The agency also added 48 new full-time equivalents (FTEs) for a total of 1,257 employees. Comments on the proposal are due to the NCUA Dec. 9; the agency will hold a public budget briefing on Dec. 8.  Comments and questions regarding the NCUA’s proposed budget can also be submitted to NAFCU Vice President of Regulatory Affairs Ann Kossachev at akossachev@nafcu.org.

Register for NAFCU’s Q4 Member Webinar: Interested in learning about the latest from Washington and a recap of updates from the final quarter of 2021? Sign up for NAFCU’s Q4 Member Webinar, happening Thursday, Dec. 2, at 4:00 p.m. Eastern. The association's award-winning advocacy team will cover the latest advocacy efforts on Capitol Hill and with regulators, economic updates, what’s next for the National Defense Authorization Act (NDAA), and more. Registration is now open.

Read the latest NAFCU Journal: The November-December edition of The NAFCU Journal is available now and includes a one-on-one feature with Representatives Ed Perlmutter, D-Colo., and Blaine Luetkemeyer, R-Mo., on their take on congressional priorities, bipartisanship, and more. This edition also covers how to facilitate transparency between regulators and credit unions.