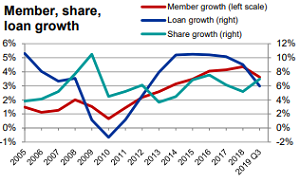 Credit unions have stronger loan growth than banks, though the margin is narrowing, according to NAFCU’s third-quarter CU Industry Trends report. The report also noted a weakening in loan growth, which is now below share growth for the first time since early 2013.

Other key data from the trends report:

The member-only quarterly report, sent to credit unions Monday, includes state-level maps highlighting state averages of select performance measures and delivering key trends based on NCUA data, both at the industry level and broken down by region, state and asset class. It also revealed that delinquencies are still declining for all but the largest credit unions.

NAFCU's member-only CU Performance Benchmark and Operating Expense reports, providing credit unions with individualized financial performance and expense analyses based on the most recent call report data, were sent to credit unions last week and are now available for download via NAFCU's website.