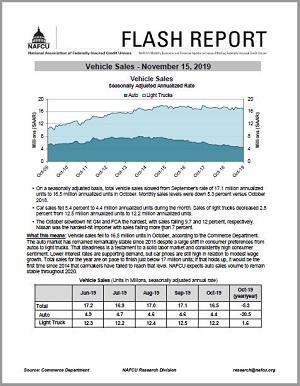 Although total vehicle sales fell to 16.5 million annualized units in October from September's rate of 17.1 million – and were down 5.3 percent from a year ago – NAFCU Chief Economist and Vice President of Research Curt Long noted that "the auto market has remained remarkably stable since 2015."

"That steadiness is a testament to a solid labor market and consistently high consumer sentiment," Long said in a Macro Data Flash report. "Lower interest rates are supporting demand, but car prices are still high in relation to modest wage growth."

While NAFCU expects auto sales to remain steady through next year, Long flagged that "total sales for the year are on pace to finish just below 17 million units; if that holds up, it would be the first time since 2014 that carmakers have failed to reach that level."

Among the car makers, General Motors and Fiat Chrysler Automobiles were hit hardest during the month's slowdown (-9.7 percent and -12 percent, respectively). Nissan saw sales fall more than 7 percent, making it the hardest-hit importer.