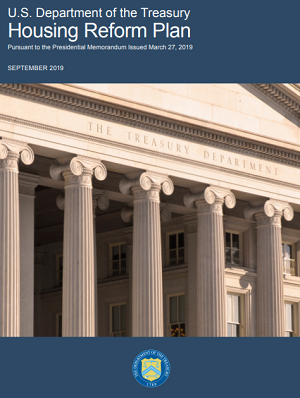 The White House Thursday released the Treasury Department's plan to reform the government-sponsored enterprises (GSEs), Fannie Mae and Freddie Mac, proposing to remove them from federal control. Housing finance reform plans from the Department of Housing and Urban Development (HUD) were also released.

"We appreciate the Trump Administration's commitment to reforming our housing finance system by working to promote competition and putting an end to taxpayer bailouts," said NAFCU President and CEO Dan Berger following the plan's release. "Moving forward, NAFCU will continue to work with the administration, Treasury and Congress to ensure guaranteed access to the secondary mortgage market for lenders of all sizes, loan pricing at the GSEs that is based on quality not quantity, and the establishment of an explicit government guarantee at the GSEs to provide certainty in the marketplace."

The Treasury's plan features specific legislative and administrative recommendations, including:

NAFCU has been the leading voice for credit unions during housing finance reform discussions. The association continues to work closely with administration officials – including FHFA Director Mark Calabria, with whom Treasury collaborated on its plan – lawmakers and other stakeholders to ensure credit unions' unhindered access to the secondary mortgage market. NAFCU Caucus attendees will get additional insights into this plan Wednesday when Calabria speaks; the Senate Banking Committee is also set to hold a hearing Tuesday on the issue with Calabria, HUD Secretary Carson and Treasury Secretary Steven Mnuchin.

While NAFCU is supportive of allowing the GSEs to rebuild capital, it recommended that the FHFA allow the GSEs to submit capital restoration plans as allowed under the Housing and Economic Recovery Act – a provision that makes clear Congress envisioned a path to remove the GSEs from conservatorship. The association also believes that restoration plans shouldn't be approved until Congress has agreed to codify certain safeguards.

The association will continue to advocate for credit unions as housing finance reform implementation gets underway.