This week: NAFCU committed to advocacy on NDAA, BSA/AML reform, and CFPB reform 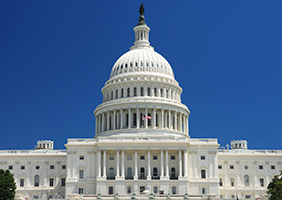 NAFCU's award-winning advocacy team remains active on Capitol Hill this week as the House and Senate remain in session and hold hearings. In addition to its advocacy efforts, NAFCU's complimentary Roadshow Webinar series continues this week – with events continuing through the end of July – and will hit all 50 states and U.S. territories where credit unions operate to keep the industry informed of coronavirus-related developments and state-specific insights.

Previous webinars are available on-demand; learn more about the series and register for your respective state here.

Also of note this week, tomorrow is the last day to apply for new paycheck protection program (PPP) loans. There is still roughly $128 billion of funds available.

The Senate continues its work on the Fiscal Year 2021 National Defense Authorization Act (NDAA), which is the pending business on the floor. The bill includes NAFCU-opposed language that would require the Department of Defense (DoD) to treat banks on military bases the same as credit unions. NAFCU, along with the Defense Credit Union Council (DCUC) and CUNA, voiced opposition against the provision in  a joint letter to the Senate last week and urged members to contact their Senators in opposition to the provision.

On Wednesday, the House Armed Services Committee will hold a full committee markup of its version of the FY2021 NDAA. NAFCU, along DCUC and CUNA, again voiced opposition in a letter to the Committee earlier this month. The House did not include such a provision in its version of the NDAA last year.

NAFCU will be following the markup to ensure that no such amendment is added this year to the House bill and will remain engaged with both the House and the Senate as they consider the FY2021 NDAA.

The full House is also expected to take a vote today on the Protecting Your Credit Score Act (H.R. 5332). NAFCU Vice President of Legislative Affairs Brad Thaler wrote the House to outline NAFCU’s concerns and opposition to the legislation last week.

The association is also offering online education opportunities weekly that tackle problems specific to the pandemic, as well as other issues that impact credit unions day-to-day operations. Here is a look at the webinars offered this week:

Give Your Members the Gift of Fraud Protection for the Holidays

December 02, 2020 Add to Calendar 2020-12-02 09:00:00 2020-12-02 09:00:00 The Evolving Credit Crisis- How Credit Unions Can Respond Now Listen On: Key Takeaways: [03:32] Banks are reporting minimum increases in the things you would expect to see as warning signs like charge-off rates and delinquency rates.  [11:20] Sophisticated modeling techniques are models that are built from lots of historical information, can tie variables together, and anticipate credit losses.  [17:29] The credit unions that have a good understanding of their membership, markets, loan portfolios, and the ability to get some insight into those analytics may see some opportunities to expand into other product types.   Web NAFCU digital@nafcu.org America/New_York public

The Evolving Credit Crisis- How Credit Unions Can Respond Now