Home Blogs & Publications Compliance Blog Can You Send Us A W-9?

This week, NAFCU heard from many credit unions who received a letter from Progressive Insurance asking the credit union to fill out and return an IRS Form W-9. Many credit unions have asked us why this letter was being sent, if the credit union needs to do this, and similar concerns. While tax law is quite technical and complex, so somewhat outside the scope of our expertise, Progressive’s letter indicates their request is driven by a January 1, 2019 requirement under the U.S. Foreign Account Tax Compliance Act (FATCA).

As background, FATCA was passed into law in March 2010 and requires backup withholding for certain kinds of payments. FATCA has a large impact on foreign financial institutions and nonfinancial foreign entities. Many credit unions are familiar with the W8-BEN form and other FACTA-related requirements. For example, FATCA also requires U.S. institutions to withhold tax on certain payments to foreign financial institutions (FFIs) that do not report information to the IRS regarding their U.S. accounts. U.S. withholding agents must also withhold tax on certain payments to nonfinancial foreign entities (NFFE) that do not provide information on their substantial U.S. owners. So what does this have to do with Progressive’s letter?

As far as upcoming deadlines, from what we can gather, effective January 1, 2019, a 30% withholding tax will apply to “gross proceeds from the sale or other disposition” of any property that produces certain covered income. This applies to certain individuals when payments are made to some non-US financial institutions – generally for non-US financial institutions who are not from a country with an “intergovernmental agreement.”

It seems that Progressive may be sending any financial institution that is listed as a lienholder on its insurance policies this letter, perhaps to verify the current taxpayer ID number and FATCA status of all parties it may make payments to. FATCA does seem to require new withholding certificates from foreign payees based on changes going into effect this year, but that is an entirely different form. According to its letter, Progressive is seeking new W-9s from those entities that are potential payees such as lienholders, in order to “certify…that a payee is a US entity and thus not subject to” a 30% backup withholding requirement for these kinds of payments. This seems to be how Progressive has decided to ensure it properly withholds 30% from covered gross proceeds where necessary. Here is a screen shot of one of the letters: 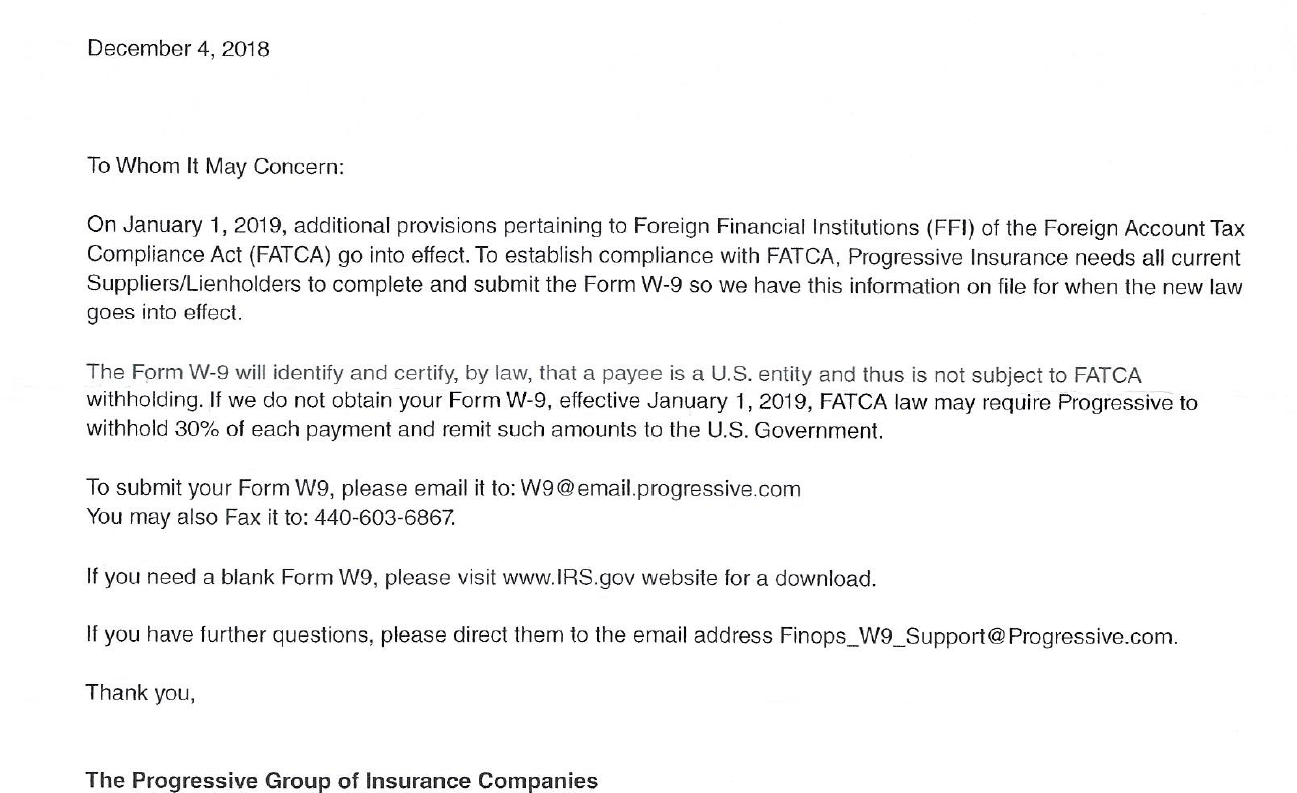 Another recent change that could be driving this issue is that a new version of the W-9 form was released in October 2018. Some credit unions may already have a W-9 on file with a past payer like Progressive. However, there does not seem to be a federal requirement for a credit union to be providing a new W-9 to every single entity that it may hypothetically at some point in the future receive a payment from. Credit unions that do choose to provide a W-9 to potential payers upon request may find the W-9 instructions helpful. Some payees, like financial institutions, can make a notation on the form that a payee is exempt from backup withholding. Although credit unions are exempt from this kind of backup withholding, payers may still have obligations to report amounts paid such as on one of the variations of Form 1099.

Some tax experts have indicated that a new W-9 is not necessary when the form itself is updated, and the instructions indicate that a new W-9 is required if the name, taxpayer ID number, or legal entity type changes for the account. But if a credit union has never provided a W-9 to the requester in the past, it may want to clarify whether it will be given the opportunity to provide a W-9 at the time an actual payment is being made to the credit union. It may also be worth determining whether the payer plans on automatically withholding 30% from potential future payments as soon as it sees it has no W-9 on file.

If a credit union were to provide a W-9 to every entity that may potentially pay the credit union funds at some point the future, that could be a lot of paperwork. It is possible that payees such as insurers might, at minimum, require an updated W-9 to be provided prior to making any future payments to a credit union in order to meet its own internal requirements or otherwise avoid running afoul of FATCA in its role as a payer of funds. Overall, credit unions will need to make a business decision and may want to consult with its accountant in making this kind of determination.