Happy Friday to all! My name is Alexander Monterrubio and I am part of NAFCU's Regulatory Affairs team. Before you start your Labor Day weekend, let's take a second to talk about an increasingly popular subject among lending circles' the recently finalized Military Lending Act (MLA) regulation. [Director's editorial note--what Alex is trying to say is, sorry for the really long blog post leading into a holiday weekend! ~Brandy]

Regulation Z contains the rules for determining which fees are included in the finance charge to be used when calculating the APR for a consumer credit transaction. In particular, 12 C.F.R. 1026.4 and its Official Interpretations provide examples of charges that are always included, charges that are included unless conditions are met, and charges that are always excluded. Meanwhile, the Department of Defense's (DoD's) final rule modified the MLA to reflect an all-inclusive MAPR that is more expansive than Regulation Z. This different approach taken by the MLA causes a stark contrast between how a particular type of fee is treated under the respective rules.

Generally, Regulation Z excludes application fees if charged to all applicants for credit. See, 12 C.F.R. 1026.4(c)(1). The Official Interpretation defines an application fee as a charge to recover the costs associated with processing applications for credit, such as credit reports, credit investigations, and appraisals. However, if the fee is only charged to applicants who are approved or who actually receive credit, then the application fee may not be excluded from the finance charge.

Under Regulation Z, a participation fee is generally excluded from the finance charge. See, 12 C.F.R. 1026.4(c)(4). However, keep in mind that a one-time, non-recurring fee charged during the opening of the account is not a fee that is charged on a periodic basis and may not be excluded from the finance charge as a participation fee. Regulation Z's participation fee exemption also does not apply to minimum monthly charges, credit card non-use charges, or other fees based on account activity or the amount of available credit.

Regulation Z excludes premiums for credit life, accident, health, or loss-of-income insurance from the finance charge so long as certain conditions are met:

(1) The insurance coverage is not required by the creditor, and this fact is disclosed in writing;

(2) The premium for the initial term of insurance coverage is disclosed; and

(3) The consumer signs or initials an affirmative written request for the insurance after receiving the required disclosures. See, 12 C.F.R. 1026.4(d)(1).

These conditions generally aim at ensuring the consumer voluntarily purchased the coverage before allowing the charge to be excluded from the finance charge.

Similar to insurance premiums, Regulation Z excludes debt cancellation or debt suspension fees so long as specified conditions are met. See, 12 C.F.R. 1026.4(d)(3). These conditions are similar to the above conditions for insurance premiums with one additional disclosure related to notifying the consumer that interest will continue to accrue during the suspension period even though the obligation to pay is suspended.

Under the MLA, premiums for credit life, accident, health, or loss-of-income insurance and debt cancellation or debt suspension fees are included in the MAPR regardless of the voluntary nature of the purchase by the covered borrower. See, 32 C.F.R. 232.4(c)(1)(i).The DoD changed this aspect of the regulation under the reasoning that credit insurance and debt suspension products provide coverage for conditions that a covered borrower, as a member of the armed services, is already substantially insured for, or otherwise substantially provided benefits for, by the military service. In other words, these products are included in the MAPR because the DoD views them as duplicative, providing no substantial utility to covered borrowers.

It is safe to say that the DoD's intention was to cast as wide a net as possible when capturing fees to be included in the MAPR and a charge that is included in the definition of a finance charge under Regulation Z would likely also be included in MAPR calculations. However, it is important to emphasize that a charge excluded from the definition of finance charge under Regulation Z is not necessarily excluded from the MAPR.

For more information about the MLA final rule, check out the September issue of NAFCU's Compliance Monitor.

The following chart is intended to be a helpful quick reference guide to assist you in identifying how charges are treated under each regulation. This is not intended to be a comprehensive list. 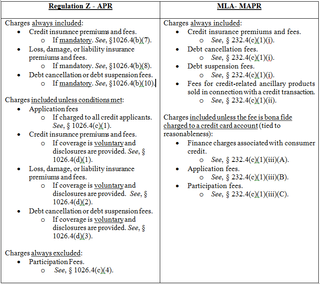 Programming Note. NAFCU's office will close at noon today and will also be closed on Monday for the long holiday weekend. We will be back to blogging on Wednesday. Have a great Labor Day weekend!

NAFCU Webcast. Join us on Wednesday, September 16 from 2PM until 3:30 PM EST for Credit Union Mergers: Pros, Cons, Do's and Dont's. A merger can be considered an opportunity or challenge for your credit union. As a top executive and decision maker, it's important to understand the best practices for a successful merger. Whether you're the merging or surviving credit union, you have to consider important aspects that may make or break your final decision to merge. Learn the pros and cons and prepare yourself and your team with this webcast.