Close
Home Blogs & Publications Compliance Blog Good to be back! This and That

Good to be back! This and That

Last week's compliance seminar was a huge hit. Here's a quick shot I took from the back of the room. Â If you stare at the picture long enough, you will actually begin to understand the risk-based pricing notice regulation. Â 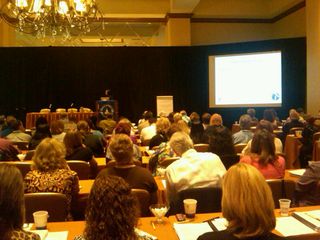 Here's one great tip that I heard from an NCUA official during the conference. Â When you send a waiver request to a regional director, be sure to work with your examiner. Â The official said when a request for waiver comes in from a credit union, a regional director usually reaches out to the credit union's examiner to get their input on what to do. Â If you kept the examiner in the loop regarding your request, they won't be surprised. Â If an examiner supports a waiver request, that goes a long way, according to the official.

My email inbox. Â I would enjoy business travel more if the world stopped spinning while I was out of the office. Â That still doesn't appear to be an option, so here are some of the interesting items that I want to share.

St. Paul Croatian Federal Credit Union. Â NCUA's office of inspector general has released a material loss review examining the failure of Saint Paul Croatian Federal Credit Union.Â Â  Wow.Â Â That's about all I can say. Fraud, weak internal controls, and weak NCUA supervision are all discussed in the report. Â If you are into internal controls and risk management, you may want to sit down as you read this one.

SAFE Act Fees. Â You probably already heard this, but Conference of State Banking Supervisors floated a proposed schedule of SAFE Act related fees. Â While this is just a proposal and your input is sought, you should look at the numbers and inject them into the budget process if it is not too late. Â

NCUA Report. Â NCUA has released the most recent issue of the NCUA Report.Â Â Â This report contains a ton of information on recent corporate stabilization efforts, multi-featured open-end lending plans, and supervisory committees. NCUA's article contained a link to this top-ten list from KPMG regarding the top 10 things audit committees should be doing this year. Â And I love top 10 lists. Â This one particularly.Â

BSA and Boards. Â In the most recent issue of the SAR Activity Review, FinCEN writes an article (starting on page 33 of the issue) designed to help financial institution boards understand the value of BSA-related filings made by financial institutions. Â It might be useful to include in your next board packet. (Hat tip to Mr. Clarke.)

Credit CARD Act. Â The OTS has updated the Regulation Z portion of its examination procedures to include information about the CARD Act. Â It is a nice resource if you need an overview.Â