May I Please Be Recused?: Avoiding Conflicts of Interest

Before the holidays, we blogged on some of the recent questions our compliance team has received on the bylaws, board of directors and other federal credit union governance issues. Today’s blog takes a look at another related question: What exactly is a conflict of interest?

Article XVI, Section 4 of the model federal credit union bylaws prohibits a director from participating in a decision that affects his or her interests. Directors are required to recuse themselves from all phases of the decision, including discussions, deliberations and voting. This requirement is rather clear when the board is selecting a new accounting firm and a director owns a local accounting firm being considered for the contract. The director has a clear interest in the company and would profit from his company being selected. As a result, the director would not be permitted to be involved in the selection process. 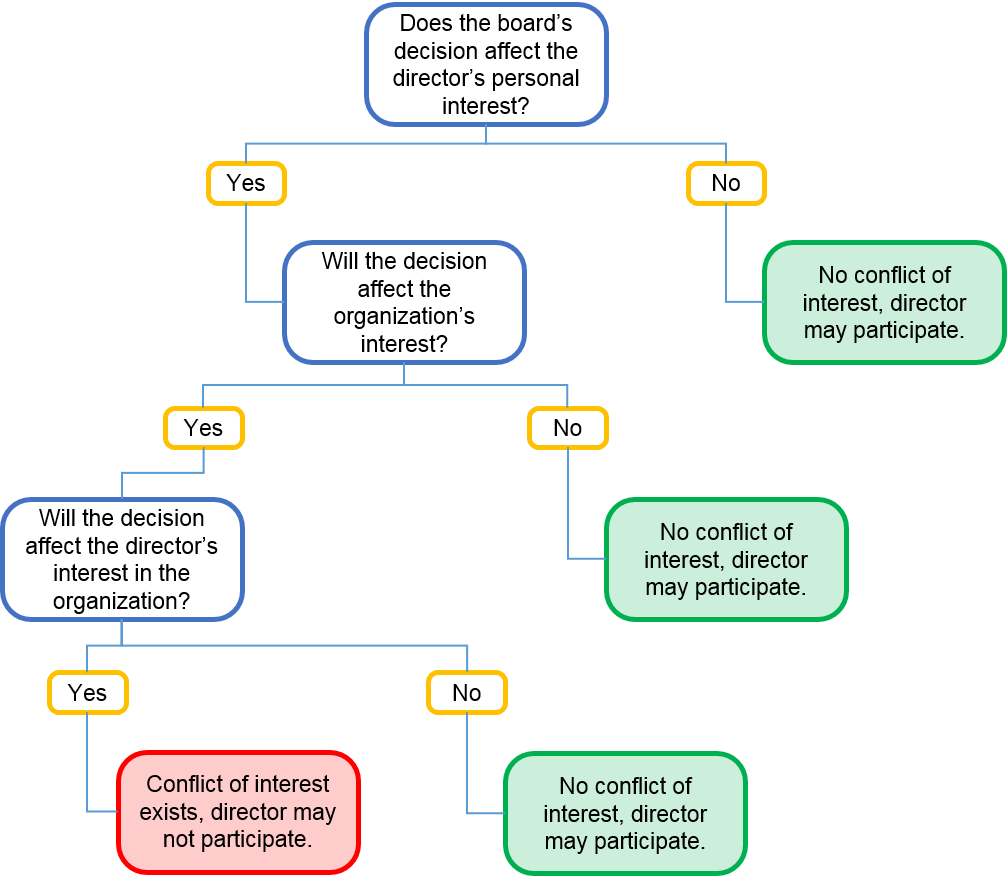 For a conflict of interest to exist, there must be a real or actual effect on the director’s interest in the organization; a speculative or hypothetical effect is not sufficient. For example, suppose Joe serves on a credit union’s board of directors. As part of his personal stock portfolio, Joe owns some stock in Intel. If the credit union is considering purchasing new computers from Intel, Joe would not be required to recuse himself from that decision. NCUA explained this is because Joe’s interest in Intel is likely so attenuated that his interest will not actually be affected by the credit union’s decision to purchase computers from Intel. As a result, the answer to the question “Will the decision affect the director’s interest in the organization?” in the chart above is “no,” resulting in no conflict of interest.

Similarly, directors can make decisions about issuing dividends and setting dividend rates even though they are members of the credit union. NCUA believes these broad decisions that affect an entire group rather than just the director’s personal interest do not create a conflict of interest.

While NCUA has taken a somewhat narrow view of the types of decisions that affect a director’s interest, there are other reasons why a director may elect to recuse himself even if recusal is not necessarily required. One such reason can be reputation risk. Depending on the facts and circumstances involved, a credit union may want to consider whether there are any potential public perception issues with the director’s involvement in the decision. Sometimes, reputation risks can be offset by how the transaction is announced or presented to the public, but this is not always the case.

Ultimately, whether a particular situation is a conflict of interest will be highly fact specific. NCUA’s two-part test and legal opinion letters should be sufficient to answer many questions, but sometimes an attorney’s opinion may also be appropriate.