Yesterday, the NCUA Board held its June meeting. The agenda for the open meeting included the following action items:

Final Rule on Voluntary Liquidations. The Board approved a final rule which, through some technical changes, aims to Ã¢ÂÂreduc[e] administrative burdens on voluntarily liquidating federal credit unions (FCUs) and recognizes technical advancesÃ¢ÂÂ¦Ã¢ÂÂ Specifically, the final rule will allow those FCUs who voluntarily liquidate to publish required notices to creditors using electronic media instead of only Ã¢ÂÂnewspapers of general circulation.Ã¢ÂÂ The rule also increases the asset-size thresholds that dictate the number of notices a liquidating credit union must publish under 12 C.F.R. 710.5(a)(1)-(3). Finally, this rule limits preliminary partial distributions to members to the amount the share account is covered by share insurance and allows credit unions the flexibility to make these distributions by wire or electronically.

Proposed Rule on Asset Securitization. The Board also approved the issue of a proposed rule which would allow credit unions to securitize their own loans Ã¢ÂÂas an activity incidental to the business for which an FCU is charteredÃ¢ÂÂ¦Ã¢ÂÂ The proposed rule includes multiple requirements credit unions would have to meet to be eligible for such asset securitizations:

The proposal imposes a limit on carried residual interests and retained interests to 25 percent of the credit union's net worth. The Board also approved a proposed rule on Part 709 of NCUAÃ¢ÂÂs Rules and Regulations, Safe Harbor. This directly relates to the asset securitization proposal and addresses the treatment of securitized assets that are transferred to NCUA in the case of the Board acting as liquidating agent or conservator of a FCU.

Proposed Rule on Appraisals. The Board also approved a proposed rule amending three of NCUAÃ¢ÂÂs appraisal provisions. First, the proposal would make a Ã¢ÂÂtechnical amendmentÃ¢ÂÂ to 12 C.F.R. 701.31(a)(1) by changing the definition of the term Ã¢ÂÂapplication.Ã¢ÂÂ The rule currently cross-references and quotes the definitions section of Regulation B. The proposal would amend the quotation to reflect the current Regulation B definition.

The proposed rule would also eliminate the requirement at 12 C.F.R. 701.31(c)(5) toÂ give members a copy of an appraisal upon request for first lien loans secured by a dwelling.Â The reasoning is that this provision is now duplicative given Regulation BÃ¢ÂÂs appraisal requirements. However, members may still request a copy of the appraisalÂ for subordinate loans secured by real estate.Â Finally, the proposed rule would amend 12 C.F.R. 722.3(a)(5), which relates to appraiser independence, by expanding an exemption. Specifically, the amendment would allow credit unions to refinance or modify existing loans without obtaining a new appraisal, Ã¢ÂÂif there is no advancement of new monies or if there is adequate collateral protection, even with the advancement of new monies.Ã¢ÂÂ

Overall, the final and proposed rules are positive for credit unions as the changes either reduce regulatory burden or provide credit unions with additional flexibility in managing their assets. In addition to more detailed blogs, NAFCUÃ¢ÂÂs Regulatory Affairs team will also issue Regulatory Alerts and a Final Regulation on these issues for NAFCU members which will provide particular details on these items.

Still Works for Treats. While weÃ¢ÂÂre sharing positive news, my husband and I discovered this weekend that Lemmy does not like balloons when we used him to help announce some news of our own! We are expecting a baby boy in October, and while Lemmy does appear concerned about this new development, itÃ¢ÂÂs really just the balloons. He was heavily rewarded with his favorite treats for his patience and modeling skills! 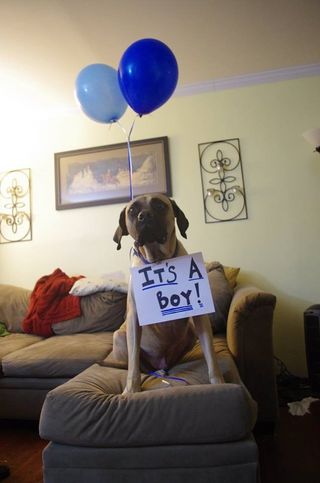