Overdrafts Still on the Radar 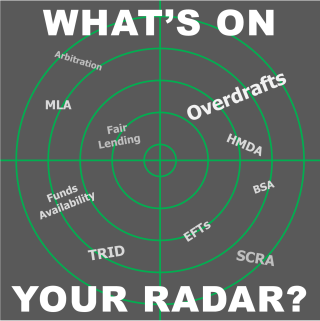 With the overdraft lawsuits still in the news, we have had a number of questions in the compliance inbox lately on the overdraft rules. The questions have touched on a number of the different overdraft provisions in both Truth in Savings and Regulation E. Here is a primer on the various rules that should serve as a helpful starting point in researching overdraft issues.

Section 707.11 of NCUA's Truth in Savings rule provides a couple different overdraft provisions. First, the disclosure requirements. The rule requires credit union to disclose two pieces of information about overdrafts fees on each periodic statement: (1) the total dollar amount of all fees imposed for paying items when there are insufficient or unavailable funds in the account, and (2) the total dollar amount of all fees imposed for returning items unpaid. The rule requires these totals to be provided for both the statement period and year-to-date. The commentary to this section explains that these totals must include per-item fees, interest charges, daily or other periodic fees and any fees for maintaining an overdrafted account. Credit unions may itemize fees in addition to providing the totals but are not required to do so.

Second, the advertising rules. If an advertisement promotes the payment of overdrafts, the rule requires that advertisement to also state: (1) the fee for paying each overdraft, (2) which transactions a fee for paying overdrafts will be imposed on, (3) the time period the member has to repay the overdraft, and (4) when the credit union will not pay an overdraft. These disclosures must appear on the advertisement in a clear and conspicuous manner. The rule also provides a number of exceptions including member-initiated inquiries, television or radio advertisements, billboards and ATM receipts.

Truth in Savings does not provide a specific definition for overdrafts. However, the commentary explains that overdrafts do not include transfers of funds from the member's other accounts even if the credit union charges a fee for the transfer or overdraft services subject to Regulation Z.

In addition to the Truth in Savings requirements, overdrafts are also covered by Regulation E. Section 1005.17(a) defines an overdraft service as a service where a credit union charges a fee on a member's account for paying a transaction when there are insufficient or unavailable funds in the account. Regulation E also does not cover transfers of funds from the member's other accounts or overdraft services subject to Regulation Z.

If a credit union charges a fee for its overdraft service in connection with an ATM or one-time debit card transaction, section 1005.17(b) requires members to opt-in to the overdraft service for these transactions. The rule requires credit unions to provide a written notice, a reasonable opportunity for the member to opt-in, the member's affirmative consent to opt-in and a confirmation of the opt-in. The notice must be provided separately from all other information. The member's affirmative consent to opt-in must be provided before a credit union may impose any fees for paying overdrafts on ATM or one-time debit card transactions. All overdraft fees must also be disclosed under section 1005.7(b)(5).

The written notice must be substantially similar to Model Form A-9. Section 1005.17(d) requires the notice to include: (1) a description of the overdraft service that includes the types of transaction that are covered by the service; (2) all fees associated with paying an overdraft including per-item fees, daily fees or other periodic fees and negative balance fees; (3) any maximum number of fees that will be imposed per day; (4) an explanation of the member's right to opt-in and (5) all other options for paying overdrafts that the credit union offers, such as a service that transfers funds from the member's other accounts.

As with most of the consumer regulations, Truth in Savings and Regulation E focus on specific disclosure requirements rather than any operational requirements. This has proved to be an area of concern in the overdraft lawsuits filed in the past few years. Both PNC and Bank of America got tied up in litigation over their transaction reordering practices. The banks would rearrange transactions and process the highest dollar transactions first rather than processing the transactions chronologically. This resulted in consumers being charged multiple overdraft fees in one day as opposed to a single overdraft fee that would have been charged if the banks had processed the transactions in chronological order.

While the overdraft rules in Truth in Savings and Regulation E do not provide requirements for how to apply transactions or calculate account balances, the rules do require credit unions to describe how the overdraft service works. Omitting key facts from that description can lead to costly litigation. NCUA's overdraft guidance is also a useful resource in determining best practices for overdraft services. The guidance suggests that credit union should clearly explain the operation, costs and discretionary nature of the service. The guidance also suggests that credit unions should explain transaction clearing practices and inform members as soon as the service has been used.