Rates They Are A-Changin’ – Disclosure Requirements for Variable Rate Products

Greetings compliance fans! With the Federal Open Market Committee (FOMC) largely expected to announce an increase in the federal-funds rate today, many of you may be wondering what obligations credit unions have under federal law to inform members should rates on some variable-rate products increase. This blog post covers some of those questions by taking a look at NCUAÃ¢ÂÂs Truth in Savings Rule and Regulation Z.

Before diving into these rules, keep in mind that share accounts and consumer credit plans are, at their base, contracts between a credit union and its membership that may be subject to various state and federal requirements outside of the scope of either Truth in Savings or Regulation Z. When contemplating a change in interest rates, the credit unionÃ¢ÂÂs agreement with the member will determine when the credit union can change rates on existing accounts.

TIS rules regarding subsequent disclosures require 30 calendar daysÃ¢ÂÂ advance written notice for some changes to share accounts. However, section 707.5(a)(1) explicitly exempts variable-rate changes. Moreover, the rule only requires disclosure of changes that are adverse to the interests of the member. Therefore, an increase in the dividend rate and corresponding annual percentage yield would not be required to be disclosed in advance.

For open-end consumer credit plans, such as credit cards, unsecured loans, and home equity plans, Regulation Z does not require credit unions to provide members with change-in-terms notices before rate increases under properly disclosed variable-rate plans. 12 C.F.R. ÃÂ§ 1026.9(c)(2)(v)(C). For this exception to the advance written notice requirement to apply, the rate change must be based on a publicly available index that is not under the credit unionÃ¢ÂÂs control. Official Interpretations of Regulation Z state that an index is publicly available if the member can independently obtain and use it to verify the annual percentage rate applied to the account.

The commentary also notes that the change must be as a result of a change in the index, and not a change in the margin used to determine the variable rate. For example, changing the margin from LIBOR + 2.50% to LIBOR + 3.00%, would not be considered an increase Ã¢ÂÂdue to the indexÃ¢ÂÂ and therefore would require additional disclosures. For credit card accounts, changing the margin would also trigger the memberÃ¢ÂÂs right to reject the proposed changes.

It is important to note that changes that occur within the first 210 days of the closing do not trigger advance notice requirements because homeowners will have received notices of the change at closing. 12 C.F.R. ÃÂ§ 1026.20 (d). However, if the first adjustment to an ARM occurs within 60 days of consummation and the new interest rate disclosed at consummation was an estimate, the disclosures must be provided to members as soon as practicable but no less than 25 days before the first payment at the adjusted level is due.

Cats and Christmas Trees: My wife and I recently put up our Christmas tree. While doing so, Hazel, the younger of our two cats decided that she wanted to help out. We adopted her from Meow Stories, a local cat rescue in Fredericksburg, VA and havenÃ¢ÂÂt been happier. Her brother, Max, seems pleased to have a friend in his own haughty, cat-appropriate way. 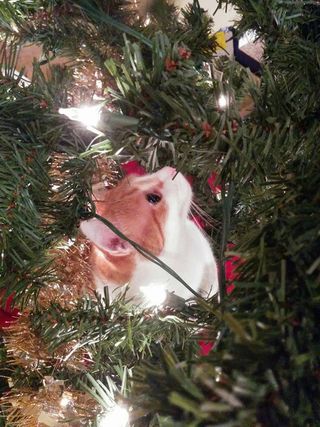