The Tooth Fairy and the Fed

When I went in to wake up my daughter yesterday she was gripping a one-dollar bill and smiling. Did the tooth fairy come last night? I asked.  She nodded her head yes and looked at the bill in her hands.  Mommy, why does all money sayFederal Reserve note on it? Her question caught me off guard and I paused and stumbled through an explanation.  My daughter is 7 and I really had not had enough coffee yet to figure out how to explain the Fed to a 7 year old.

Her question made me think though about the importance of the Federal Reserve and about NAFCU's annual meeting with the Board of Governors.  Each year traditionally the NAFCU Board of Directors meets with a member of the Board of Governors of the Federal Reserve and presents a report on credit unions.  This report is an amazing opportunity to tell the credit union story before monetary policymakers and make the case for the importance of credit unions in the economy.  Much of information of what NAFCU puts in that report comes from a survey of our members.  So, please take a moment to fill it out!

Luckily, the Hunt household expects a few more visits from the tooth fairy in the upcoming months and I can work on perfecting my talking points on currency and the central bank. Or how in a few years the tooth fairy will only be using apple pay. 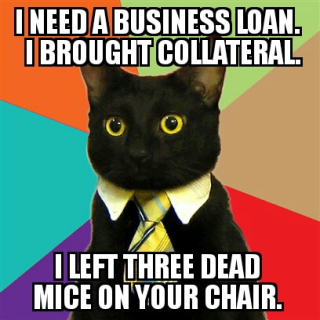 The question posed to NCUA was whether a member's single closed-end MBL continues to be an MBL once it has been paid-down below the $50,000 threshold. See, 12 C.F.R. 723.1(b)(3). NCUA affirmed that no, it does not. The letter referenced a prior legal opinion letter from 2002:

In 2002, the Office of General Counsel considered whether a FICU could use the outstanding loan balance for an MBL, rather than the original amount, to determine if subsequent business purpose loans to the same member should be classified as MBLs. The resulting opinion concluded:

[A FICU] may add the outstanding balance of a member's aggregate MBLs to the original loan amount of any new, subsequent loan to determine if, when added together, they exceed the rule's $50,000 threshold for qualifying as an MBL. . . . If the combination of all of these loans does not exceed $50,000, the subsequent loan is not an MBL and is not subject to our MBL rule.

When the member pays down the amount of the total business purpose loans owed to the credit union so that the aggregate amount falls below the $50,000 threshold, the credit union is no longer required to report the [loan that caused the aggregate amount of business purpose loans to the member to exceed the $50,000 threshold] as an MBL.

See, 68 Fed. Reg. 56537, 56545 (Oct. 1, 2003). The letter clarified that the same analysis that applies when aggregating multiple loans in the 2002 letter and the Preamble, also applies to a single loan. However, this analysis was specific to closed-end loans, as was indicated by the 2002 letter which stated, We note, however, that a CU may not use outstanding balances in this context on lines of credit due to the member's ability to draw on the line and easily alter the MBL's outstanding balance. Credit unions looking for additional guidance on calculating the MBL threshold can review the examples in the 2003 Preamble at 68 Fed. Reg. at 56545.