We have a few FAQs I wanted to tackle this morning. Since its Friday, we'll start with the two easier ones (MLA, marijuana banking).

When the Department of Defense (DoD) amended interpretative guidance back in December 2017, there was a lot of confusion especially related to indirect lending. We blogged about the issue, and addressed it in a recent edition of our Compliance Monitor (member log in required), while our advocacy teams also worked with the DoD and Congress on the need for a solution. A few folks have asked what's going on with this? On May 15, 2018, the DoD did submit another amended rule to the Office of Management and Budget for regulatory review. This is the last step before a rule can be published in the Federal Register, so stay tuned, we could see this possibly publish soon and NAFCU will keep you posted.

What's Going on with FinCEN and Marijuana Banking?

Some readers may recall that back in January 2018, the Department of Justice rescinded the "Cole memos" which had been the basis of 2014 FinCEN guidance related to marijuana banking. We blogged about this at the time, click here for more details. Despite the change in federal prosecutorial priorities and the continued categorization of marijuana as a Schedule I drug under the Controlled Substances Act, many states are taking a different approach. This trend continued this week as Oklahoma became the 30th state to legalize medical marijuana. Meanwhile, FinCEN has not officially rescinded its bulletin, but the Department of the Treasury indicated in a letter to a member of Congress that the agency is "reviewing the guidance."  So far, there are no new developments but again, we'll keep you posted.

Many credit unions asked follow up questions about the blog we ran a few weeks ago that addressed, among other things, collecting and reporting data under the Home Mortgage Disclosure Act (HMDA) in light of recent legislative amendments. Specifically, some credit unions that do not originate 500 or more closed-end mortgage loans would not be required to report new data points added to HMDA by the Dodd-Frank Act. How this will work operationally is not entirely clear, but section 304(b) of HMDA sets forth the various data points that are required:

(b)  ITEMIZATION OF LOAN DATA.--Any item of information relating to mortgage loans…shall be further itemized in order to disclose for each such item--

(1)  the number and dollar amount of mortgage loans which are insured under [FHA] or [Rural Housing Service] or [VA loans];

(3)  the number and dollar amount of home improvement loans;

(B)  the difference between the annual percentage rate associated with the loan and a benchmark rate or rates for all loans [APR vs. APOR];

(C)  the term in months of any prepayment penalty or other fee or charge payable on repayment of some portion of principal or the entire principal in advance of scheduled payments; and

(D)  such other information as the Bureau may require; and

(A)  the value of the real property pledged or proposed to be pledged as collateral;

(B)  the actual or proposed term in months of any introductory period after which the rate of interest may change;

(C)  the presence of contractual terms or proposed contractual terms that would allow the mortgagor or applicant to make payments other than fully amortizing payments during any portion of the loan term [e.g. interest only, negative amortization, balloon payments];

(D)  the actual or proposed term in months of the mortgage loan;

(E)  the channel through which application was made, including retail, broker, and other relevant categories;

(F)  …a unique identifier that identifies the loan originator…[NMLS number];

(H)  …the parcel number that corresponds to the real property pledged or proposed to be pledged as collateral;

(I)  the credit score of mortgage applicants and mortgagors…; and

(J)  such other information as the Bureau may require.

NAFCU has formally asked the Bureau for clarification on multiple aspects of S. 2155, but we reached out to the regulation inquiries hotline for assistance on this particular question. In short, the informal, non-legally binding response is that the Bureau is still in the process of reviewing the impact of the bill on HMDA/Regulation C, but does plan to issue guidance. This guidance would, at least in part, determine which specific exemptions outlined in S. 2155 coincide with particular data points identified in Regulation C. Keep in mind that the current version of Regulation C is what is in effect – in other words, while S.2155 and future guidance may allow some credit unions to not have to collect new data points added in 2018, S. 2155 did not order changes to the other data points identified in parts (1) through (4) above. For example, the amended HMDA rule changed how to report certain information relating to an applicant's race and ethnicity. This part of Regulation C implements part (4) above, which would seem to still apply to all credit unions that are financial institutions under HMDA.

In other news, a few people asked about Nolan lately. He's getting tall, does not want us to have his hair cut, and apparently chalk graffiti is not frowned upon at his preschool! 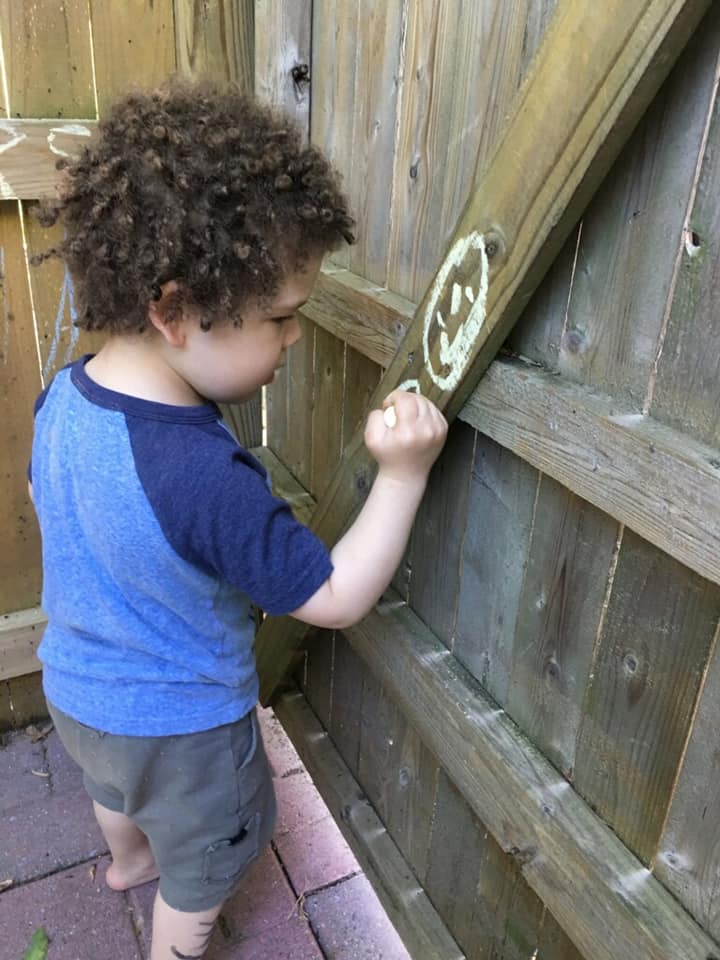