In case you missed it, NCUA is now operating with three regions instead of five as part of an agency-wide reorganization that has been going on for the past couple of years.  Here is a map of the new region structure: 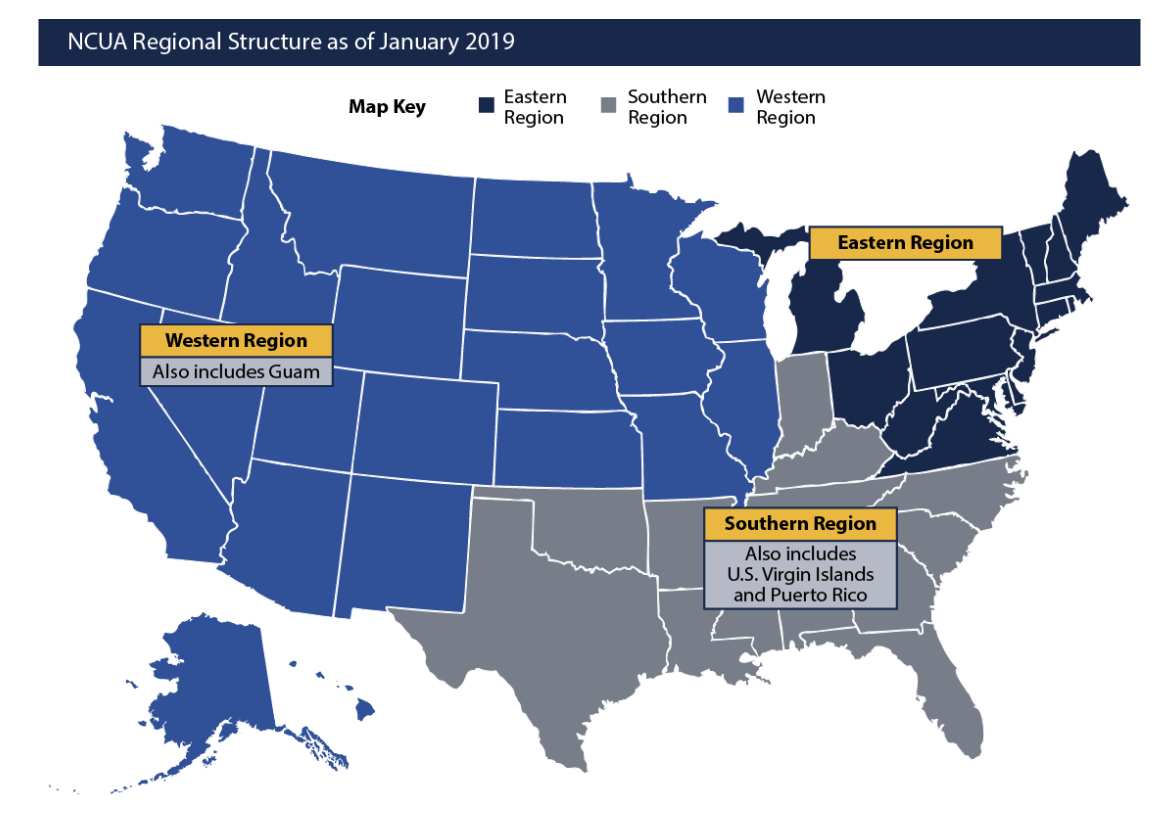 Some credit unions previously part of “Region I” are now in the “Eastern” region, and have a new regional director as a result. NAFCU has heard from credit unions in this area that credit unions with over $1 billion in assets are being asked to provide board packets to their NCUA examiner as part of monthly monitoring. Apparently this change was attributed to implementation of a policy established by the former Region II, and in part seeks to reduce time spent on site during an exam reviewing board packets. If your credit union has had a similar experience with the recent reorganization of the regions, let us know.

Speaking of NCUA reorganization, you may have noticed the agency updated its website. There are some things compliance officers might appreciate, like the return of the search function that searches by resource type (like Legal Opinion Letters). Some things are no longer available though, such as:

It is possible that some of these documents were determined to be outdated enough to take out of circulation.

ADA Update. There’s a case involving the Americans with Disabilities Act and website accessibility that, while not specific to credit unions, was being watched by many tracking these cases. This is largely because the lower court had dismissed the lawsuit on the basis that the ADA did not contain clear standards for what it means for a website to be accessible. The defendant in this particular case was Domino’s Pizza which argued, in part, that without meaningful guidance from the DOJ, it was essentially unfair to require compliance with a private industry standard to meet ADA accessibility requirements.

The lower court agreed with the defendant, but the Ninth Circuit federal appellate court overruled that decision on January 15, 2019. As a starting point, the appeals court held that the ADA could apply to both the website and mobile app of a business that is a public accommodation where there is a “nexus” between the website/app and the physical locations. The court left open the idea that it might be possible to have a situation where the inaccessibility of a website or mobile app did not “impede access to the goods and services” offered at physical locations. The court also did not reach any conclusion as to whether an accessible toll-free phone number might provide accessibility, seeming to view this as an issue that would require some fact-finding for a trial court to determine if a phone number could be an effective alternative. Of note though, the court also disagreed that the possibility of imposing private industry standards (e.g. WCAG 2.0) would violate Domino’s legal rights. Rather, the Ninth Circuit saw applying these standards as a “possible equitable remedy,” meaning a solution when money damages do not solve the problem, not the standard for determining whether or not the ADA’s accessibility requirements were met.

What does this mean for credit unions? Earlier this year, the Fourth Circuit upheld the dismissal of a lawsuit against a credit union, determining that the plaintiff lacked standing since he did not fall within the credit union’s field of membership. The Ninth Circuit has not addressed such credit union-specific issues related to standing, although there are cases presenting similar issues pending in two other federal appellate courts. It is possible there could be an overall increase in ADA website litigation activity in the Ninth Circuit (CA, OR, MT, AZ, NV, ID, WA, HI, AK) but to what extent that would impact credit unions remains to be seen.

Meanwhile, as member-focused financial institutions, many credit unions have already taken steps to ensure their websites are accessible to those with visual impairments and they are serving all of their members’ needs. This could include adopting private industry standards to make their websites compatible with screen readers. This could also involve placing accessibility statements along with toll-free numbers that are compatible with screen reader technology so those with visual impairments can easily access additional information and assistance as needed. Overall, credit unions are committed to providing members with high quality service, including being accessible. NAFCU recognizes the importance of the ADA and fully supports efforts to ensure individuals with disabilities have equal access to financial services, and will continue to advocate for clear rules of the road in this area. NAFCU will also keep monitoring litigation.

Free Webinar -  Don’t miss out on our FREE webinar on what's new in housing finance reform.