Close
Home Blogs & Publications Compliance Blog What Else is New With Marijuana Banking?; Another Credit Union ADA Victory; Help Us Help You!

What Else is New With Marijuana Banking?; Another Credit Union ADA Victory; Help Us Help You!

A couple of weeks ago, I blogged about what's new with marijuana banking.  Among other things, I provided an update on one credit union's ongoing efforts to become the first credit union chartered to support the marijuana industry and with a field of membership focused on cannabis groups.

In response to my post, several credit union industry players reached out to ask how many cannabis-friendly credit unions are currently handling marijuana-related accounts.

Who's Holding All That Cannabis Money?

Recent reports indicate that legal marijuana sales reached $9.7 billion across the seven states where recreational marijuana was legal and Canada in 2017. That number does not include California, which is projected to hit $3.7 billion in legal cannabis sales by the end of 2018, and $5.1 billion in 2019. Overall, despite continued federal prohibition here in the U.S., North American legal cannabis sales are expected to hit $24.5 billion by 2021.

Because the substance continues to be illegal under the federal Controlled Substances Act, marijuana businesses have remained challenged in obtaining traditional financial services but information from the Treasury Department indicates that more institutions are taking on these accounts.

According to FinCEN's Marijuana Banking Update, based on Suspicious Activity Report (SAR) filings, around 400 depository institutions were actively banking marijuana businesses in the U.S. as of September 30, 2017.  Less than 100 of those were credit unions, while the rest were banks.  FinCEN's data shows that the agency received a total of 39,025 SARs using key phrases associated with marijuana-related businesses by the end September 2017. 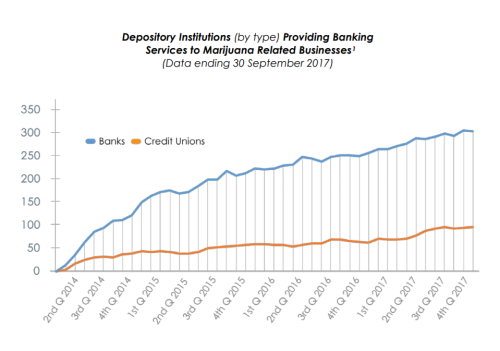 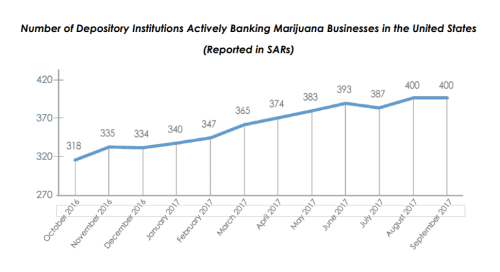 While the number of institutions serving marijuana businesses has more than tripled since 2014, federal data shows that only a small percentage of the 5,573 federally-insured credit unions across the country are reporting service to marijuana businesses.  The growing industry will likely continue to be underbanked as long as cannabis continues to be federally illegal.

On March 5, in another win for the credit union industry, a federal district court in Virginia granted a credit union's motion to dismiss an Americans with Disabilities Act (ADA) website accessibility suit.  See, Carroll v. ABNB Federal Credit Union, No. 2:17-cv-521 slip. op. (E.D. Va. Mar. 5, 2018).  NAFCU filed an amicus brief in this case; we have filed five briefs so far in support of our member credit unions.

In addition, cases against two Texas credit unions (involving the same plaintiff) were dismissed on March 2. NAFCU also filed an amicus brief in support of one of those credit unions.

Please visit NAFCU's ADA webpage to learn more about this issue, and to keep apprised about what NAFCU is doing to fight for credit unions.

Today is the last day to share your voice on the topic of Financial Literacy & Community Outreach. We rely on your survey responses for our industry analysis and legislative advocacy efforts on behalf of all credit unions.