The Word of the Day is…Preemption

Federal credit unions ask about preemption from time to time, and we've blogged on the topic more generally in the past. A recent appellate case out of the Ninth Circuit has some FCUs asking questions about state laws that require payment of interest on mortgage escrow accounts.

As a starting point, the Ninth Circuit Court of Appeals encompasses Alaska, Arizona, California, and Hawaii. Opinions out of this court influence litigation outcomes in these states, but may also be persuasive to judges considering similar issues in other jurisdictions.  Recently, this court heard a case called Lusnak v. Bank of America, here's a highly abridged version.

A consumer sued the bank for not paying interest on mortgage escrow accounts as required by California state law. The bank argued that the National Bank Act preempted the state law, and thus as an institution chartered under this act, the state law did not apply. The court disagreed, in part on the nuances of the specific preemption provision, and in part because of section 1639d(g)(3) of the Truth in Lending Act which states:

(3) Applicability of payment of interest

So what might this mean for federal credit unions? First, the Federal Credit Union Act (FCU Act) gives a FCU's board of directors rather broad authority to set dividend rates, here's an excerpt from section 1761b of the FCU Act:

… Among other things, the board of directors shall—

(18) declare the dividend rate to be paid on shares, share certificates, and share draft accounts pursuant to the terms and conditions of section 1763 of this title…

Meanwhile, section 701.35(c) of NCUA's regulations says state laws on the fees and charges for share accounts do not apply to FCUs:

(c) A Federal credit union may, consistent with this section, parts 707 [Truth in Savings] and 740 [advertising rule] of this subchapter, other federal law, and its contractual obligations, determine the types of fees or charges and other matters affecting the opening, maintaining and closing of a share, share draft or share certificate account. State laws regulating such activities are not applicable to federal credit unions.

(d) For purposes of this section, “state law” means the constitution, statutes, regulations, and judicial decisions of any state, the District of Columbia, the several territories and possessions of the United States, and the Commonwealth of Puerto Rico. (Emphasis added.)

There are also legal opinion letters from NCUA on this subject which conclude that state laws mandating interest payments on escrow accounts are preempted. Here is an excerpt from a letter from 1991 that concluded a similar Wisconsin law was preempted:

Section 138.052(5)(a) of the Wisconsin Statutes Annotated provides that "a . . credit union . . . which originates a loan after January 31, 1983, and which requires an escrow ac- count to assure the payment of taxes or insurance shall pay interest on the outstanding principal balance of the escrow of not less than 5.25% per year, unless the escrow funds are held by a 3rd party in a noninterest-bearing account."

The Wisconsin statute is preempted by Section 701.35(c). The decisions whether an account will receive dividends and, if so, what dividend rate will be paid, are matters affecting the maintaining of a share account, and are therefore decisions to be made by an FCU's board of directors. State laws such as the Wisconsin statute, which purport to regulate such decisions, are inapplicable to FCUs. (Emphasis added.)

Also, Legal Opinion Letter 96-0106 clarified that escrow accounts are not subject to these kinds of state laws since "there is no authority for an FCU to establish an escrow account in any way other than as some form of share account," and "as such, the authority to set dividend rates is established by the Act and NCUA's regulations and not by state law."

Speaking of preemption…NCUA has issued an opinion on a Wisconsin regulatory interpretation that prohibited credit unions from using the word "bank" or "banking" to describe the credit union's services. Apparently, NCUA disagrees, and while the legal opinion was not up on NCUA's website as of Friday afternoon, it will be up soon. The letter may be informative on the topic of preemption so we'll blog about it once it is available.

Lemmy had a minor procedure a little over a week ago. He came home in the "cone of shame," but the poor guy needs such a big one he really just couldn't maneuver with it on. So we let him swap it out for one of my husband's old t-shirts, which he much preferred (but was still pretty comical). 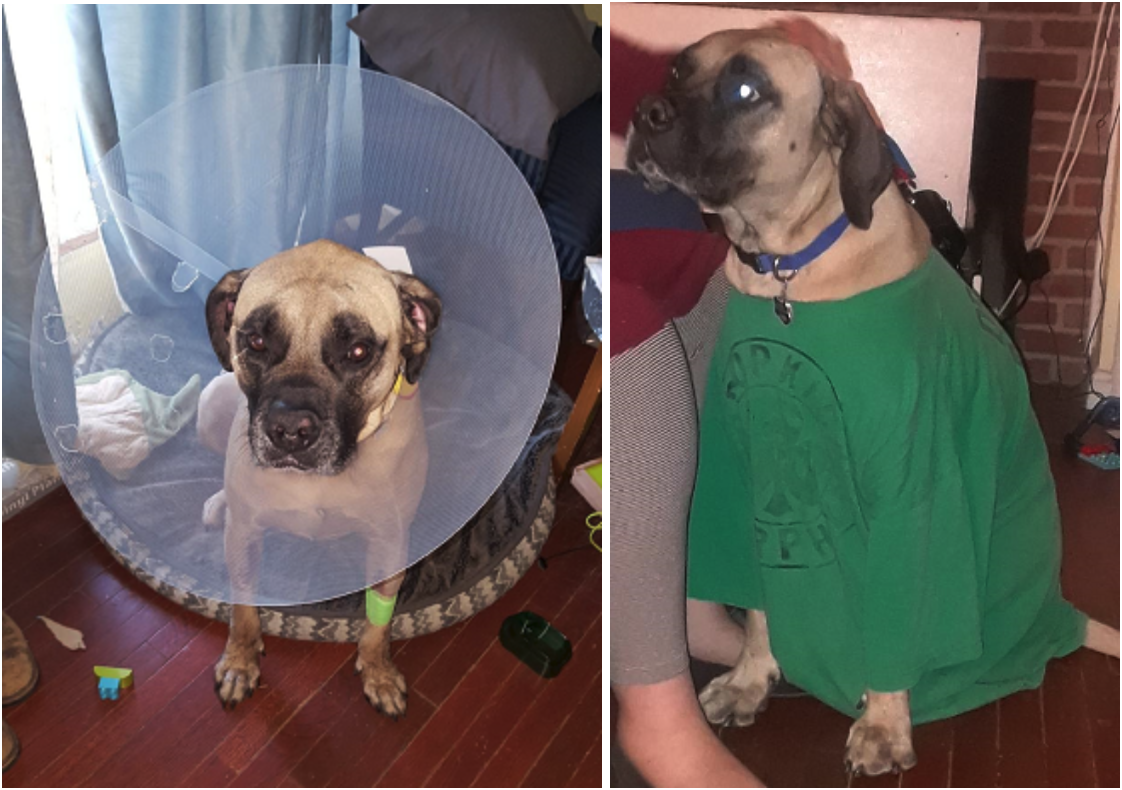