Some of the best advice can seem, at some level, counter-intuitive.

And the immortal advice that entered my life in 1985...Â

Well, I've seen a few examples of counter-intuitive advice lately along the lines of productivity and management.

The idea that we can get it all done is the biggest myth in time management. There's no way Brad can meaningfully go through all his email and there's no way any of us are going to accomplish everything we want to get done.

Face it: You're a limited resource.

Each day only has 24 hours and we can't sustainably work through all of them.
On the one hand, that's depressing. On the other hand, acknowledging it can be tremendously empowering. Once we admit that we aren't going to get it all done, we're in a much better position to make explicit choices about what we are going to do. Instead of letting things haphazardly fall through the cracks, we can intentionally push the unimportant things aside and focus our energy on the things that matter most.

Stop making to-do lists. They're simply setting you up for failure and frustration. Consider the to-do lists you're currently managing: how many items have been languishing since Michelle Bachman was leading the field for the Republican nomination? How often do you scan your list just so that you can pick off the ones you can finish in two minutes? How many items aren't really to-dos at all, but rather serious projects that require significant planning?Â

I also try to keep quiet more now that IÃ¢ÂÂm a Ã¢ÂÂboss.Ã¢ÂÂ I may have an idea or think I know an answer to something in a meeting, but giving others time and space to figure it out or draw their own conclusions helps with their critical thinking development Ã¢ÂÂ especially for some of the greener staff.Â

I learn a lot from Alicia. Â You could as well. Â Here's a post she wrote for the NAFCU Services Blog, where Alicia wants to know whether you are "denting" the universe.Â

The essential takeaway is that the new economics of personal productivity mean that the better organized we try to become, the more wasteful and inefficient we become. We'll likely get more done better if we give less time and thought to organization and greater reflection and care to desired outcomes. Our job today and tomorrow isn't to organize ourselves better; it's to get the right technologies that respond to our personal productivity needs. It's not that we're becoming too dependent on our technologies to organize us; it's that we haven't become dependent enough.

Â Any tips to share? Â I'd love to hear them.Â

My kids love when we drive around in the evening. Â They love spotting airplanes, trucks, police cars...you name it. We recently drove into DC, and Kate spotted the Washington Monument for the first time at night.

Here's a recent picture of my future astronaut. Â Have a great weekend, everyone! 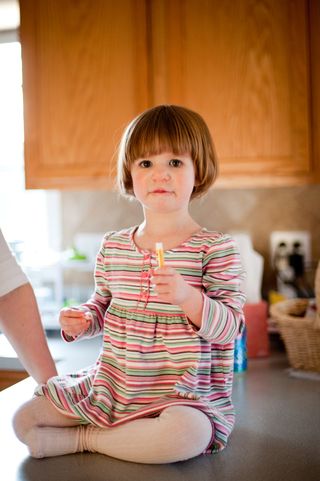