Deadline for Spouse Beneficiaries Treating the IRA as Their Own 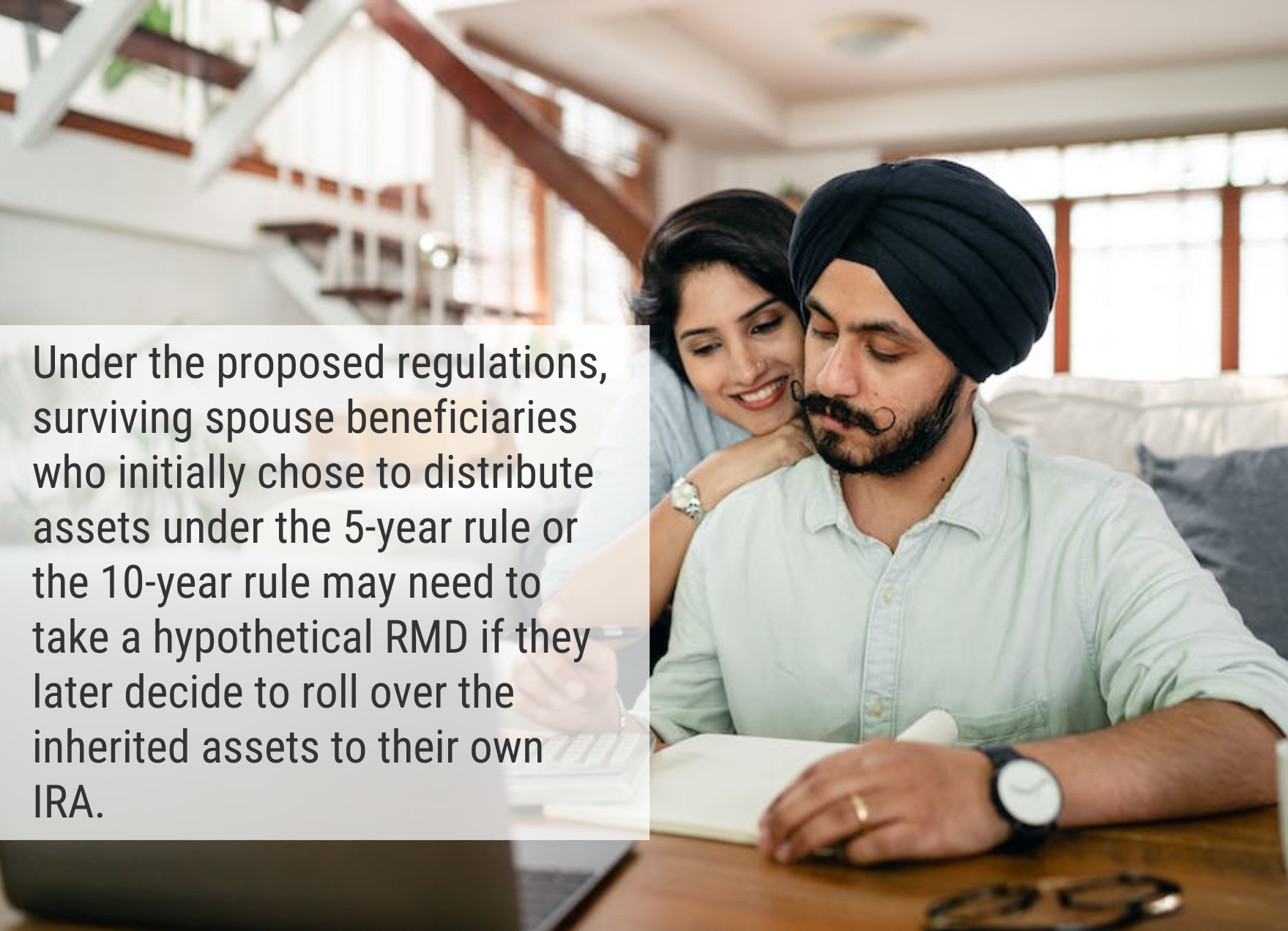 Existing Regulations – Under the current rules, the surviving spouse of an IRA owner has the option to “treat as own” at any time and at any age, as long as the surviving spouse is the sole beneficiary or, if there are multiple beneficiaries, separate accounting has been applied timely. The existing regulations also define “treat as own” narrowly. Spouse beneficiaries are deemed to treat an IRA as their own if they:

If separate accounting is not in place by December 31 of the year following the year of death, then the spouse beneficiary could still take a distribution and, if eligible, roll over the assets to her own IRA. So even though the mechanism is different, the result is the same: the original IRA owner’s assets are now in the spouse beneficiary’s own IRA. Most spouse beneficiaries transfer the decedent’s IRA assets into their own IRA. This is a cleaner way to move the assets; there is no reporting by either the financial organization (on IRS Forms 1099-R and 5498) or by the spouse (on an IRS Form 1040).

Some spouse beneficiaries may benefit from keeping the assets in an inherited IRA—at least temporarily—rather than treating as their own. For example, a spouse beneficiary under age 59½ may want the option of being able to take death distributions, which are exempt from the 10 percent early distribution penalty tax. Once the spouse attains age 59½, this additional tax no longer applies, so the spouse may decide to transfer the assets into the spouse’s own IRA at that time.

Proposed Regulations – Under the proposed regulations, spouse beneficiaries would be able to treat an inherited IRA as their own in the same manner as under the existing regulations—but they would have to do it by a specific deadline. The proposed deadline for this election is the later of:

After these dates, spouse beneficiaries could not treat an IRA as their own—such as through a transfer—but could distribute and roll over the inherited assets to an IRA, if otherwise eligible.

Under the proposed regulations, surviving spouse beneficiaries who initially chose to distribute assets under the 5-year rule or the 10-year rule may need to take a hypothetical RMD if they later decide to roll over the inherited assets to their own IRA. The hypothetical RMD equals an amount that would have been required to be distributed had the life expectancy rule applied to the spouse beneficiary. This amount must be excluded from any rollover contribution, apparently to remove any temptation to avoid RMDs that normally would apply to the surviving spouse beneficiary.

Spouse beneficiaries may be required to take hypothetical RMDs if:

Example: Martha, age 66, died on May 18, 2022, leaving her IRA to her husband, Mark, age 64. At first, Mark decides to keep the assets in an inherited IRA and distribute them under the 10-year rule. Mark does not take a distribution until 2031—the ninth year after Martha’s death—at which time Mark decides to roll over the assets to his own IRA. Because Mark is 73, he has to calculate two hypothetical RMDs, based on his single life expectancy in the years that he would have had to take payments. These hypothetical RMDs are ineligible to be rolled over, so Mark distributes the hypothetical RMDs before rolling over the remaining balance to his own IRA.

No Transition Guidance Yet

Although the proposed regulations have not yet been made final, they are currently proposed to be retroactively effective as of January 1, 2022. The IRS held a public hearing on the new rules on June 15, 2022, and is currently reviewing comments received on the proposed guidance. As a result, it may take several months for the IRS to release final regulations.

This may be a good time to review the proposed regulations before they become permanent. If your members are unsure which option is best for them, they should consider seeking competent tax advice before making a decision.