On June 22, Connecticut jointed 17 other states and District of Columbia in legalizing the use of recreational cannabis. Additionally, 36 states now allow for the medical use of cannabis products. For many entrepreneurs and investors, the new world of legal marijuana presents an attractive business opportunity. What must be kept in mind, however, is that despite the trend towards legalization at the state level, marijuana remains illegal under federal law. As a result, marijuana businesses are subject to an adverse federal tax rule which can have a significant impact on their bottom lines, and put them at a considerable disadvantage relative to other commercial enterprises. 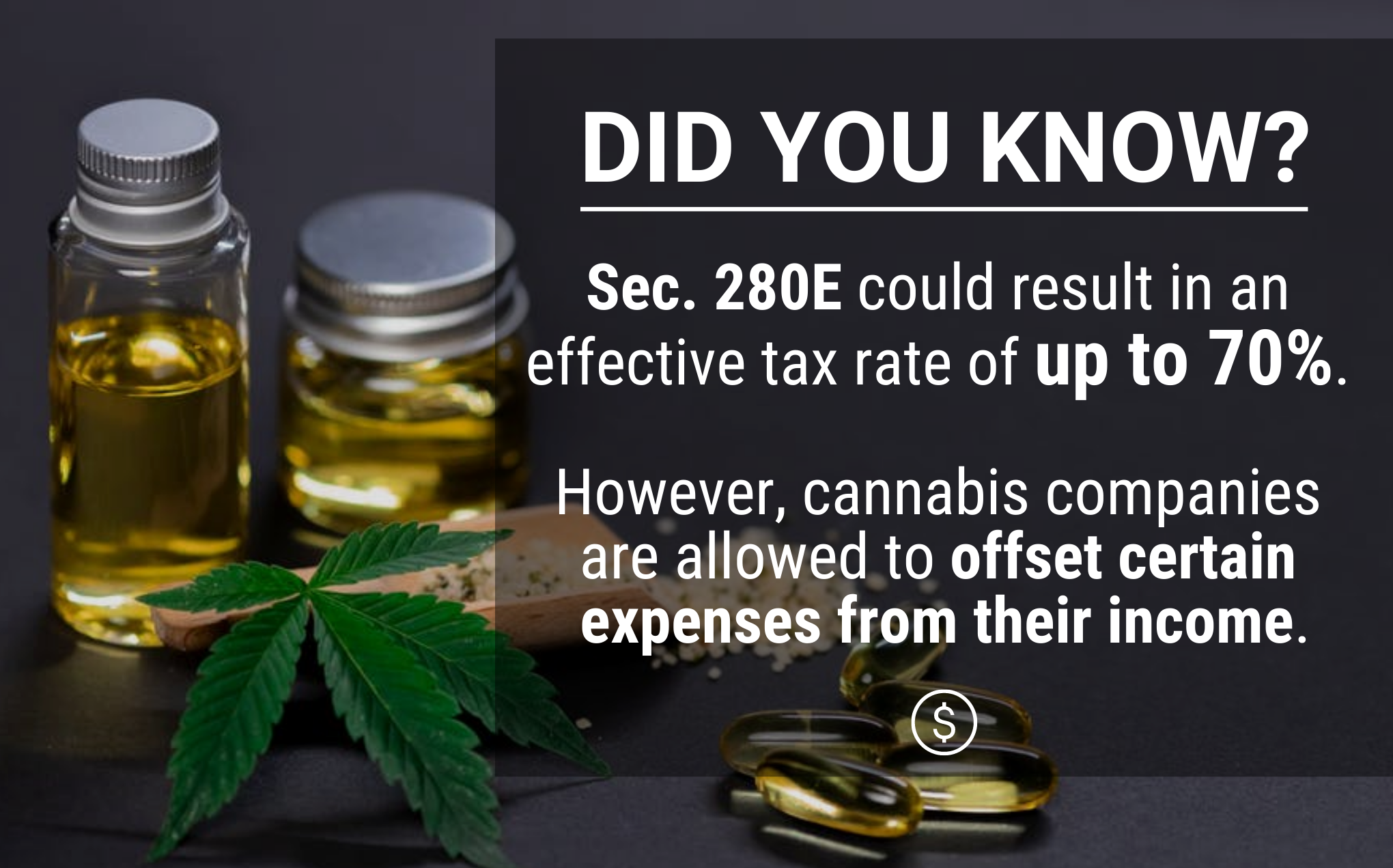 Usually, a business is permitted a tax deduction for ordinary and necessary expenses such as rent, employee salaries, insurance, and advertising. What’s different for marijuana businesses is Sec. 280E of the Internal Revenue Code, which states:

Put simply, Sec. 280E disallows expense deductions and credits for businesses that traffic in controlled substances, including marijuana, which is currently listed in Schedule I of the Controlled Substances Act. “Trafficking” under the section language isn’t limited to large-scale activities of criminal drug cartels; it includes the operations of licensed businesses engaged in commercial activities which are legal under state law, including dispensaries legally providing medical marijuana prescribed by a doctor.

The section, which was enacted by Congress in 1982 in response to a Tax Court case in which a cocaine dealer was allowed deductions for phone, auto, and rental expenses, effectively precludes legally operating cannabis companies from deducting otherwise legal business expenses.

Offsets for Cost of Goods Sold

Despite the harsh impact of this rule, which, according to some industry sources, can result in an effective tax rate of up to 70%, cannabis companies are allowed to offset certain expenses from their income.  Because Congress’ authority is limited to taxing income rather than revenue, businesses subject to Sec. 280E may still offset their gross receipts by the cost of goods sold (“COGS”). Generally, COGS represents the costs of acquiring inventory, through either purchase or production, and certain other directly related expenses which vary based on whether the businesses are involved in production or resale. COGS is not a deduction but an adjustment to gross receipts for the purpose of calculating gross income.

Cannabis businesses have challenged the application of Sec. 280E on various grounds, but have largely been unsuccessful. The Tax Court has rejected, among others, arguments that Sec. 280E is an unconstitutional penalty under the Eighth Amendment, that trafficking does not include activity of a dispensary operating legally under state law, and that Sec. 280E only applies to certain deductions and credits identified specifically in the Internal Revenue Code.

Cannabis companies involved in more than one trade or business, however, have had some limited success challenging the application of Sec. 280E to their legal, non-marijuana businesses. For example, the Tax Court determined that a community center for members with debilitating diseases was actually operating two distinct businesses – one that provided caregiving services, and another that dispensed medical marijuana. As a result, Sec. 280E did not preclude the business expense deductions attributable to the caregiving services. The determination of whether particular activities are unrelated activities that are not disallowed is both a question of fact and of law. Taxpayers may take the position that expenses related to certain business activities are not disallowed under Sec. 280E. However, there is risk that such positions could be challenged by the IRS or overturned by the courts

A number of legislative proposals would mitigate the effect of Sec. 280E on marijuana business operating legally under state law. For example, one proposal would reclassify marijuana as a Schedule III controlled substance, making Sec. 280E inapplicable to marijuana businesses. Other proposals would amend Sec. 280E by to specifically exempt medical marijuana sales if legal under state law. Notably, the Marijuana Opportunity Reinvestment and Expungement Act, which would have removed marijuana from the list of federally controlled substances, was passed by the House of Representatives in late 2020. Though that bill was not taken up by the Senate, it was reintroduced in the House this year.

Internal Revenue Code Sec. 280E is a major impediment for marijuana related businesses because of its disallowance of deductions for related business expenses. Taxpayers conducting such businesses need to understand this challenge, carefully assess whether expenses are instead for Unrelated Activities and understand and monitor legal developments and potential legislative solutions. Given expanding legalized marijuana related business activities at the state level, market participants hope that subsequent developments will reduce the related federal income tax burdens that currently exist.