On May 31, 2017, the Federal Reserve Board issued a final rule amending Regulation CC. Previously, we discussed how this new Regulation CC addresses electronic checks and RDC warranties and indemnifications. Now, we're going to have a look at another big change in the final rule: the expeditious return of checks.

But before we dive in, let's a take a moment to acknowledge that Regulation CC can be technical and boring. Your NAFCU Regulatory Compliance Team does the best we can to make it interesting... but there's only so much you can do. In that spirit, here's a photo of a cheetah and a puppy engaged in an unlikely animal friendship: 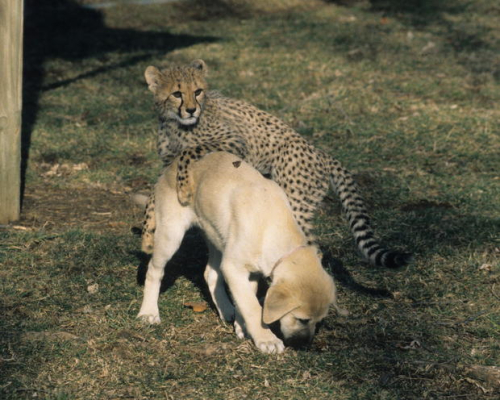 Currently, under sections 229.30(a) and 229.31(a), a credit union returning a check is required to do so in "an expeditious manner." An expeditious manner is a manner that meets one of two tests: the two-day test or the forward collection test.

The two-day test (a/k/a the two-day/four-day test) requires that the check must be received by the depositary bank no later than 4:00pm its local time on the second business day from when the check was presented for payment.

The forward collection test compares a credit union's swiftness in its handling of a check for return to its handling of a check for collection. It requires the return to be made in the same manner that a similarly situation bank (or credit union) would normally process a check of the same amount if it had theoretically been deposited by noon on the day after it was actually presented for payment, and was being sent for collection, rather than return.

Under section 229.33, if a check is in the amount of $2,500 or more, a credit union returning the check must also provide a notice of nonpayment. That notice must be provided in a manner that meets the two-day test. The return of the check itself may serve as the required notice of nonpayment, assuming the returned check includes all the content requirements for the notice.

Expeditious Returns Under the Final Rule

Part of the Fed's goals in issuing a new rule is to encourage electronic processing of checks. The Fed stated that an electronic clearing process "offers lower costs, faster returns, and fewer errors, which substantially reduces risk to the check system compared to the previous largely paper-based environment." In an effort to incentivize the implementation of electronic check returns, the Fed is implementing stricter requirements for what constitutes an expeditious return.

As we discussed in the previous blog post, under the final rule, Subpart C of Regulation CC (which contains the provisions regarding the collection of checks) will apply to "electronic checks." It will also apply to "electronic returned checks." These are electronic images of, and electronic information derived from, a paper check (or a paper returned check) that is sent to a receiving bank pursuant to an agreement and conforms with the applicable ASC X9 standards.

Under the final rule, all checks, paper and electronic, must be returned in a manner that meets a modified version of the two-day test. The forward collection test will no longer be used. Under the new two-day test, the return must be received by the depositary bank no later than 2:00pm its local time on the second business day after the check was presented for payment. Not 4:00pm local time.

Lastly, the Fed added a new condition for depositary banks who might want to assert a claim when another financial institution fails to return the check in an expeditious manner. Previously, there was no such condition. Under the final rule, new section 229.33(a), the depositary bank must have arrangements in place that would allow a check return to be made electronically, directly or indirectly, by commercially reasonable means. The burden of proving that these arrangements exist is on the depository bank asserting a claim. So, under this new rule, if a credit union does not have arrangements in place to receive returned checks electronically, even indirectly, it may forfeit its right to bring a claim against another financial institution for its failure to return the check to the credit union in an expeditious manner.

The new Regulation CC goes into effect on July 1, 2018. We're continuing to dig through the rule -- so more to come.