Boo! Happy Halloween and welcome back to the second installment of our RBC series where NAFCU's Compliance Blog will break down different portions of the final rule in order to help our compliance colleagues learn the basic framework of NCUA's new RBC requirements.  One of the phrases that dominated the RBC conversation for the past 22 months has been two-tiered structure.  In honor of Halloween, I thought today's topic should be unmasking what the two-tiered structure really means.

Make sense? It's tricky, I know.  So here's a little treat for this trick let's break it down through pictures.

Below is a picture of Part 702's current framework- leverage ratio and RBNW. 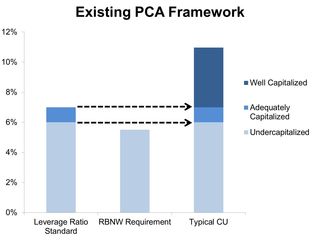 Now compare it to a picture of how Part 702 will be structured in 2019 leverage ratio and RBC: 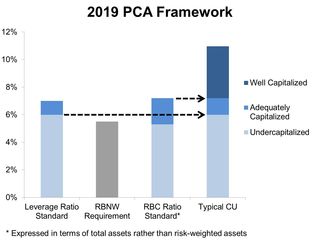 As you can see, under the final rule, RBNW goes away and is replaced by RBC, which has two tiers indicated by the dark and light blue bars. Therefore, the final rule requires a credit union to compare its RBC requirement with that of the leverage ratio for both tiers  the one between well and adequately capitalized and the one between adequately and undercapitalized. For most credit unions, this will not affect the lower standard, since it has generally been governed by the leverage ratio anyways. However, for many credit unions the standard for the well capitalized designation will increase as a result of this rule.

Phew!! Who needs candy? I think you all earned it after reading this blog post.  Have a happy and safe Halloween. When you get back from your weekends, please be sure to take a look at NAFCU's Final Regulation 15-EF-15, our Capital Reform Issue Page, or reach out to me directly (anealon@nafcu.org, 703-842-2266) with any RBC questions.