Between over-the-top rewards and celebrity spokespeople, credit card companies can seem like formidable competitors to credit unions that have considered entering the credit card market. But those who’ve taken the leap say that credit unions can employ their unique strengths — like established trustworthiness and local roots — to offer credit card options that attract their members and grow their bottom line.

As Texell Credit Union President and CEO Tony Hale says, “The majority of people, if they’re creditworthy, are going to have a credit card. So why not ours?”

Central Texas-based Texell reentered the credit card market in 2012 after selling its portfolio in 2006. The $31 million portfolio generated $4 million in interchange fees and interest in the 12 months leading up to July 31, 2019. Membership penetration is 31 percent, heading toward Texell’s goal of 45 percent.

“If you have a good product, it’s not a hard sell,” says Hale.  Member voices drive many credit card initiatives. After Southern California-based First Financial Credit Union sold its credit card portfolio in the late 1990s, member surveys revealed that “members wanted a credit card with us. We designed a Platinum Visa that is a great relationship product. It is simple — vanilla offerings — but that is what members wanted,” says First Financial President/CEO Carlton Musmann.

The credit union responded, but with a kind of gourmet “vanilla bean” tailored to the membership field of educators — a low-, fixed-rate card with no foreign transaction fees, free overdraft source, discounts on auto loans and skipped payments allowed.

“You don’t need to offer everything and the moon,” says Musmann. “Members just want a good, differentiated product to help them manage their funds.”

At Michigan-based American 1 Credit Union, credit cards constitute a “very strategic” 27 percent of offerings, says President and CEO Martha Fuerstenau. Branches issue the low-rate, no-fee card instantly. Cardholders can direct donations toward favored charities. And they can choose from more than 100 images to customize their card, because “when you select a personal image for your card, you’re more likely to pull that card out,” Fuerstenau says.

In the early 2000s, American 1 decided that loan officers would propose a credit card loan with every auto loan. The risky approach sparked “very difficult discussions” with regulators, and the credit union had to “tolerate high delinquency and high charge-offs,” Fuerstenau says. But the bottom line speaks for itself, she says, with interchange fees and interest income on high volume — 115,000 credit card transactions a month, generating $9.2 million in revenue in 2018.

Credit unions are positioned to leverage the power of local support and relationships, says Mastercard’s Yasemin Bedir, executive vice president of community institutions and processors for North American Markets. Rewards remain consumers’ top reason for choosing a card, Bedir says, but Mastercard’s analytics show the second most common reason a card is chosen is its discounts and offers that are local and relevant to the cardholder.

“Cards will move beyond one-size-fits-all rewards,” Bedir says. “In the coming years, we expect that relevant benefits, a deeper understanding of community needs and local offers will make more sense. Also, a seamless user experience will become even more important.”

Credit cards do more than beef up the bottom line. They also promote growth and member engagement.

Texell’s Hale says member relationships that “go beyond the logo on the plastic in their wallet” contribute to a low delinquency rate. Every swipe of the card, measured by metrics, drives up engagement and cements Texell in the consumer’s mind as their bank, which makes them the first choice for auto loans, mortgages and accounts.

“We’re not asking for monogamy, but we want to be the No. 1 spot,” says Hale. “If we’re losing engagement, it makes us ask where the gaps are in our products and services.”

The complexity of processing and the volume of transactions mean that there will be occasional issues, says Fuerstenau. American 1’s extensive training turns service personnel, all local, into experts at unraveling and resolving those issues, which makes a lasting impression. “You can build a relationship even in a challenging situation,” she says.

The simplicity of First Financial’s card “makes it easy for not only our members to understand, but our staff,” says Vice President/Visa Core Product Manager Vivian Vega. “It’s easy to have those conversations.”

Credit cards are “great tools to establish long-term credit relations” through everyday usage, says Mastercard’s Bedir. And this is where credit unions rise to the top. Credit unions “have, literally, one-to-one relationships with the member base. Th ey understand their needs better and can customize their offerings.

Plus, trusted vendors can help credit unions differentiate their credit cards and seize overlooked opportunities, says Catherine Klimek, senior counsel for Securian Financial, whose portfolio of financial solutions includes loan forms. Applications can be streamlined. Documents can be customized. Available credit insurance and debt protection can be used to minimize risk. Promotions can gear up quickly.

The goal is seamlessness for customers and credit unions, while maintaining regulatory compliance, Klimek says. Credit unions have been performing many of the same tasks at point of sale for years, but they could be missing opportunities to move them online and into “take-one” fliers, she says.

“Chances are, they’re selling credit protection on the credit card face to face when a consumer comes into the branch, but we’ve seen a lot of credit unions missing it online,” Klimek says. “We help clients do it in a way that works with their processes and our technology, as well as maintaining compliance with the regulations that surround those products.”

Reaching the Top of the Wallet

Texell’s existing credit cards serve the needs of a longstanding and loyal middle-class membership. But the credit union saw an opportunity among the region’s more affluent residents whose needs are different for credit cards. Branch personnel reported they were having difficulty selling credit cards to members, who would instead pull out their other cards and applaud their features and rewards.

“They're more interested in putting spending on a credit card each month and getting appropriate rewards for doing so,” says Hale, who realized “we’ve got a product gap. What can we do to correct that?”

The correction came in the form of Texell’s new contactless signature credit card. While rewards constitute some of the appeal, convenience could be the bigger draw to consumers accustomed to paying for their obligations — everything from utilities to auto loan payments to streaming subscriptions — with one monthly payment.

First Financial is “getting there” on making its card top-of-wallet, Musmann says. Ongoing communications include seasonal email and digital and phone campaigns, tailored to spending habits and practices revealed by data analysis. Th e-campaigns remind members to take advantage of what a great card they have, Musmann says. “They know, at the end of the day, which is the best credit card in their wallet.”

Scale determines “the deal you get back from the networks,” notes Hale, especially for rewards-based cards. In negotiations, more cardholders leverage higher interchange fees, which generate fatter rewards that, in turn, attract more cardholders. 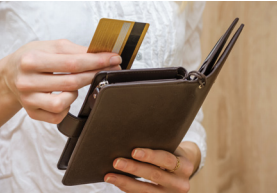 Fuerstenau advises careful consideration before offering rewards that would be difficult to take away. American 1 once declined to attach rewards to its debit card, because it didn’t make financial sense and because “once you’re in it, you’re in it.”

Revolving Credit on the Rise

Revolving credit is one area in which credit unions can see their profits rise. At Texell, 75 percent of credit cards carry a balance, and although not all those cardholders are paying interest, it is “a huge driver for profitability,” says Hale. Running debt on a card, he adds, is “a personal choice,” often successfully managed by members accustomed to making regular payments.

Revolving credit jumped 8 percent in May 2019 and is up 4.5 percent on the year, NAFCU reported in its July Macroeconomic Data Flash report. The Consumer Financial Protection Bureau reported in July that two-thirds of actively used credit card accounts carry a revolving balance. Once account holders begin to revolve, revolving continues for an average of 10 months.

At American 1, algorithms help predict those who might be vulnerable to delinquencies. Red flags such as the sudden stoppage of automatic payroll or a change in purchasing behavior could prompt a call to the member — not an unusual occurrence, because the credit union makes courtesy calls all the time, Fuerstenau says.

Reviews of creditworthiness are another way of reaching members. When Securian personnel field questions about raising credit limits, they will sometimes craft suggested language to deploy, but credit unions have “a lot of flexibility” regarding their ability to increase the credit limits of credit card holders, Klimek says.

CECL on the Way

Implementation of the Financial Accounting Standards Board’s new methodology for current expected credit losses — CECL, for short — got booted into 2023 for credit unions. However, executives warn that now is the time to prepare for ballooning reserves.

First Financial is incorporating CECL into its current strategic planning, Musmann says. The question under consideration is the potential cost increase in annual provision expense. “You need all that data, and we will have all that data,” he says. “If CECL requires us to put more money toward allowance, it’s a forward mechanism. We have to forecast loss.”

CECL shouldn’t impact Texell’s reserving formula because of the credit union’s low delinquency and below-industry loss averages for credit cards, Hale says. But at the moment, it’s “a regulatory gyration that’s already costing us money to do a bunch of tracking. Hopefully, we can glean some business benefit from tracking the CECL requirements, but if we can’t, then it’s just another unfunded mandate.”

At the moment, American 1 sees “maybe a slight increase” in reserves, but no one’s hitting the panic button, Fuerstenau says. The key is starting to plan now. “You have to be collecting your data,” she says.

Consumers will likely increasingly demand contactless credit cards and seamless experiences. The chosen card on file will assume gigantic proportions in the race to top-of-wallet as shopping moves online.

The desire by financial institutions to attract digital natives offers “more room for us to differentiate ourselves,” says Bedir. Credit unions can leverage their convenient ATM locations and branches for face-to-face service and sales, while better integrating digital offerings into overall strategies.

Plus, Bedir says, more consumers are using credit cards for small purchases. In that area, credit unions can find opportunities for engagement and revenue, as “more and more transactions mean more and more everyday usage.”

Few merchants in central Texas have adopted contactless technology yet, but when it happens, Hale knows that convenience-oriented consumers could reach first for Texell’s new signature-rewards contactless card. Even at about $1 more per card to produce, the contactless cards made financial sense.

M. Diane McCormick is a freelance journalist and frequent contributor to The NAFCU Journal.