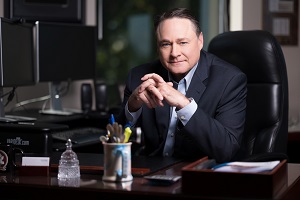 In a new op-ed for American Banker, NAFCU President and CEO Dan Berger calls out the soaring closure rate of big bank branches and its disproportionate impact on underserved, rural communities, while simultaneously hastening the formation of banking deserts. Recognizing the toll the pandemic took on local economies, Berger mentions that while Americans and Main Street small businesses were seeking leadership and guidance from financial institutions big banks “began closing their doors in communities already suffering from financial and other disparities.”

Berger cites a National Community Reinvestment Coalition (NCRC) report which revealed that America’s banks took advantage of the crisis to accelerate the pace of already planned branch closures, with one-third of these closures concentrated in low- to middle-income and minority neighborhoods over the past five years. “Since March 2020, banks have closed more than 4,000 branches across the country. At 201 closures per month, they doubled their closure rate which - for the past 10 years - averaged around 99 per month,” wrote Berger.

Meanwhile, credit unions actually increased their presence in these communities by 2.4 percent; NCUA data even shows that credit union branches maintained the same levels throughout the first year of the pandemic, and “that more than 730 credit unions continued plans to add branches to their networks,” noted Berger.

Other reports, including one released by the CFPB, reaffirm the detriment bank branch closures have on consumers in rural areas and note how at the same time credit unions are expanding to fill the banking desserts created by these bank closures. An American Economic Association study also finds that the rise of these closures have led to a persistent decline in community small business lending, stunting small business growth overall.

“It is unfortunate that banking groups continue to actively oppose H.R. 7003, attacking efforts by credit unions to do more to help the underserved, rather than focusing on ensuring people who live in banking deserts – areas that banks have abandoned -- have access to basic financial services,” wrote Mesack.

In addition, Mesack shared the restrictions credit unions face when trying to help these underserved communities, including the limitations of the industry’s field of memberships. Regardless of the banks’ tireless attacks and those limitations, Mesack articulates all that credit unions do to continue to provide financial services to rural and underserved areas.