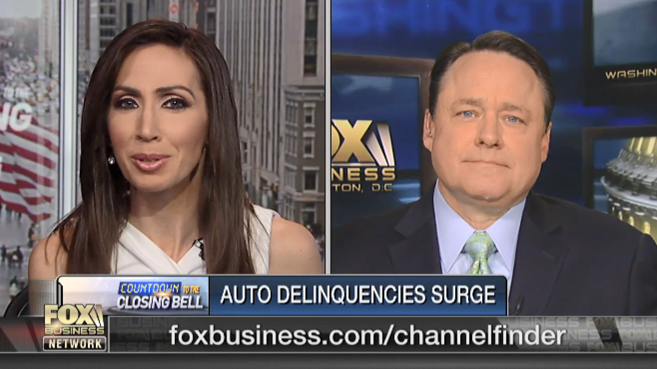 Appearing on Fox Business' Countdown to the Closing Bell yesterday, NAFCU's Dan Berger gave an exclusive interview on what the rise in auto loan delinquencies could mean for the economy. Joining host Lauren Simonetti, Berger also gave his review of additional economic indicators worth watching.

"The credit union industry's delinquencies are very low, so when we dove into the numbers, it seems finance companies are going into the subprime market. That is really where you’re seeing the real spike in [auto loan] delinquencies," noted Berger, NAFCU's president and CEO.

When discussing the overall economy, Berger added that "the economy is robust, but there are some headwinds out there. China's economy is clearly slowing down. When China gets a cold, they have a habit of infecting everybody else across the globe. [Additionally], corporate debt in the U.S., and globally, is the highest it's ever been. Those payments are coming due."

In terms of the when the economy may slow down, Berger mentioned he sees the "economy ticking down a little bit," possibly in the fourth quarter of 2019 or in the first half of 2020.