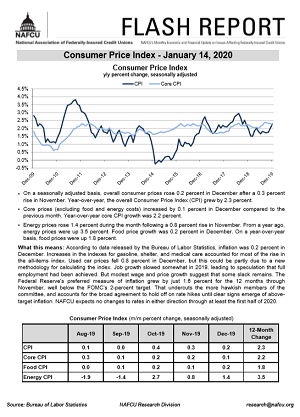 "Energy is up 3.5 percent to its year-ago level, and has continued a rise for two consecutive months," said Long, NAFCU's chief economist and vice president of research. "Used car prices fell 0.8 percent in December, but this could be partly due to a new methodology for calculating the index.

“The Federal Reserve’s preferred measure of inflation grew by just 1.6 percent for the 12 months through November, well below the FOMC’s 2-percent target. That accounts for the broad agreement to hold off on rate hikes until clear signs emerge of above-target inflation," he concluded.

The FOMC is set to hold its first meeting of 2020 Jan. 28-29. The committee cut rates three times last year before holding the target rate range at 1.5 percent to 1.75 percent at the conclusion of its December meeting.

Energy prices also rose in December, increasing 1.4 percent. Food growth was up 1.8 percent on a year-over-year basis after rising 0.2 percent in December.

Diversify Your Portfolio with Student Loan Refinancing and Participations