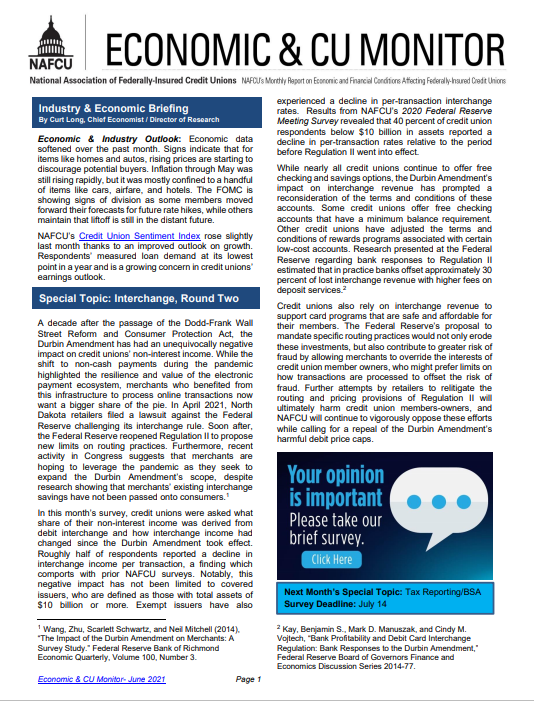 NAFCU's new Economic & CU Monitor – now available for download – takes a look at the impact of interchange on credit unions.

A decade after the passage of the Dodd-Frank Wall Street Reform and Consumer Protection Act, the Durbin Amendment has had an unequivocally negative impact on credit unions’ non-interest income. Moreover, in April 2021, North Dakota retailers filed a lawsuit against the Federal Reserve challenging its interchange rule. Soon after, the Federal Reserve reopened Regulation II to propose new limits on routing practices.

In this month’s survey, credit unions were asked what share of their non-interest income was derived from debit interchange and how interchange income had changed since the Durbin Amendment took effect.

Roughly half of respondents reported a decline in interchange income per transaction, a finding which comports with prior NAFCU surveys. Notably, this negative impact has not been limited to covered issuers, who are defined as those with total assets of $10 billion or more. Exempt issuers have also experienced a decline in per-transaction interchange rates. The survey notes that credit unions rely on interchange revenue to support card programs that are safe and affordable for their members.

NAFCU will continue to vigorously call for a repeal of the Durbin Amendment’s harmful debit price caps and oppose attempts by retailers to relitigate the routing and pricing provisions of Regulation II will ultimately harm credit union members-owners.

Also included in the latest Economic & CU Monitor are results from the Credit Union Sentiment Index (CUSI), an index based on NAFCU member responses to eight questions on growth and earnings outlook, lending conditions and regulatory burden.

The CUSI rose slightly in May, thanks to an improved outlook on growth. Of note, respondents’ measured loan demand at its lowest point in a year and is a growing concern in credit unions’ earnings outlook.

NAFCU relies on survey responses to provide its members a glimpse of trends affecting the credit union industry as a whole and inform its advocacy efforts. Next month's survey is focused on tax reporting and Bank Secrecy Act (BSA) responses are due July 14.