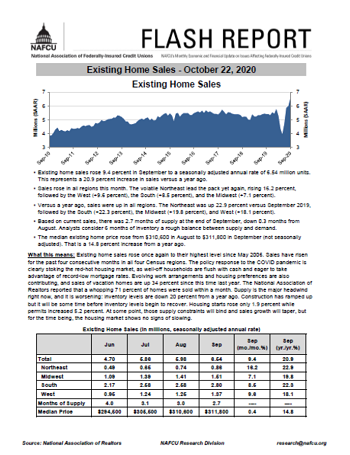 Existing-home sales rose 9.4 percent in September to a seasonally-adjusted rate of 6.54 million units, the highest level since May 2006. In a new Macro Data Flash report, NAFCU's Curt Long noted that this rise represents a 20.9 percent increase in sales versus a year ago.

"The policy response to the COVID pandemic is clearly stoking the red-hot housing market, as well-off households are flush with cash and eager to take advantage of record-low mortgage rates," wrote Long, NAFCU’s chief economist and vice president of research. "Evolving work arrangements and housing preferences are also contributing, and sales of vacation homes are up 34 percent since this time last year.

"The National Association of Realtors reported that a whopping 71 percent of homes were sold within a month," Long added. "Supply is the major headwind right now, and it is worsening: inventory levels are down 20 percent from a year ago."

Based on current sales levels, there was 2.7 months of supply at the end of September, down 0.3 months from August. Analysts consider six months of supply to be roughly balanced between supply and demand.

"At some point, those supply constraints will bind and sales growth will taper, but for the time being, the housing market shows no sign of slowing," Long concluded.

The median existing-home price rose sharply from $310,600 in August to $311,800 in September (not seasonally-adjusted), representing a 14.6 percent increase from the median price a year ago.