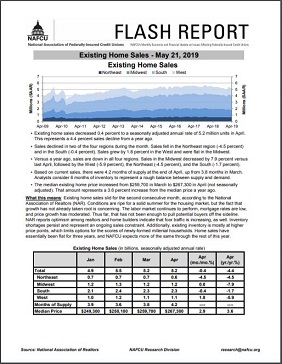 "Conditions are ripe for a solid summer for the housing market, but the fact that growth has not already taken root is concerning," said Singh in a NAFCU Macro Data Flash report. "The labor market continues to perform, mortgage rates are low, and price growth has moderated. Thus far, that has not been enough to pull potential buyers off the sideline.

Sales fell in two of the four regions during the month: Sales in the Northeast decreased 4.5 percent and in the West 5.9 percent. Sales grew 1.8 percent in the West and were stagnant in the Midwest.

Based on current sales, there were 4.2 months of supply at the end of April, up from 3.8 months in March. Analysts consider 6 months of supply to be roughly balanced between supply and demand.

The median existing home price increased from $259,700 in March to $267,300 in April (not seasonally adjusted). That amount represents a 3.6 percent increase from the median price a year ago.