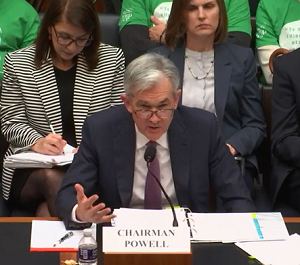 Federal Reserve Chairman Jerome Powell provided the House Financial Services Committee with economic insights during a hearing Tuesday, indicating that he does not expect a recession soon. Powell is on Capitol Hill this week providing the central bank's semiannual monetary policy report; he testifies before the Senate Banking Committee today at 9:30 a.m. Eastern.

In his opening statement, Powell detailed the current economy situation and monetary policy. The Federal Open Market Committee (FOMC) – the Fed's monetary policy-setting arm – maintained rates at the current range at the end of its meeting last month, which Powell briefly discussed.

In addition, Powell acknowledged lawmakers' concerns about the impact of the coronavirus on the economy, saying that the Fed is "closely monitoring the emergence of the coronavirus, which could lead to disruptions in China that spill over to the rest of the global economy."

Powell was also asked about federal banking regulators' efforts to modernize the Community Reinvestment Act (CRA), which some lawmakers believe could undermine important aspects of the law. The Office of the Comptroller of the Currency (OCC) has released its own reform plan – without the support of the Federal Reserve and FDIC. Credit unions currently are not subject to the federal law; NAFCU has actively opposed extending CRA regulations to credit unions, as they do not engage in the illegal and discriminatory practices of banks.

NAFCU will monitor today's hearing with Powell and provide credit unions with any important updates. Access the association's award-winning research and economic analyses.

Diversify Your Portfolio with Student Loan Refinancing and Participations