How would same-day ACH affect operations? 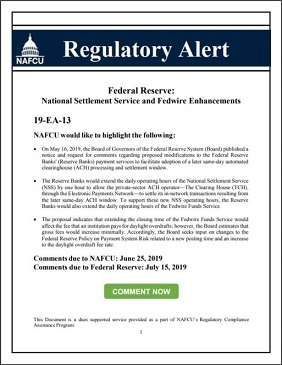 NAFCU has issued a Regulatory Alert to member credit unions seeking feedback on the Federal Reserve's proposed changes to its banks' payment services to facilitate the adoption of a later same-day ACH processing and settlement window.

The Fed's proposal would extend the daily operating hours of the National Settlement Service (NSS) by one hour to allow the private-sector ACH operator – the Clearing House (TCH), through the Electronic Payments Network – to settle its in-network transactions resulting from the later same-day ACH window approved by NACHA in September.

NAFCU notes in the Regulatory Alert that the fees an institution pays for daylight overdrafts would be affected by the closing time extension of the Fedwire Funds Services, though minimally. The association would like to know:

Credit unions can submit comments to NAFCU through its Regulatory Alert until June 25; comments are due to the Fed July 15.

Navigating the LIBOR Transition as a Credit Union

How to Strengthen Your Credit Union’s Compliance Culture