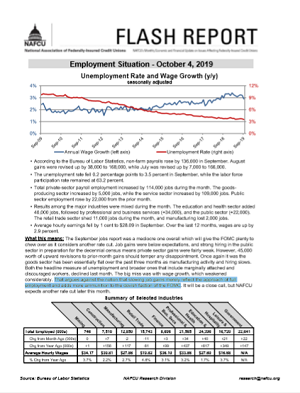 September's job report fell below expectations with only 136,000 jobs added even as the unemployment rate dropped to 3.5 percent. NAFCU Chief Economist and Vice President of Research Curt Long described the report as "mediocre…which will give the [Federal Open Market Committee (FOMC)] plenty to chew over as it considers another rate cut."

"Job gains were below expectations, and strong hiring in the public sector in preparation for the decennial census means private sector gains were fairly weak," Long said. "…The big miss was with wage growth, which weakened considerably. That argues against the notion that slowing job gains merely reflect the approach of full employment and adds more ammunition to the dovish faction of the FOMC."

Average hourly earnings in September fell 1 cent to $28.09; wages are up 2.9 percent over the year.

In the major industries, however, the results were more mixed during the month: The education and health sector added 40,000 jobs and professional and business services added 34,000, while the retail trade sector lost 11,000 jobs and manufacturing lost 2,000 jobs.

The FOMC meets Oct. 29-30 and Long said the decision "will be a close call, but NAFCU expects another rate cut."