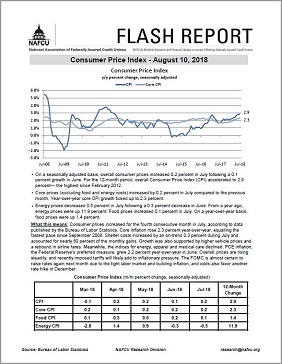 The FOMC, the Fed's monetary policy-setting arm, increased the federal funds target rate by a quarter-point to a range of 1.75 to 2 percent during its June meeting but refrained from raising rates earlier this month.

Overall consumer prices rose 0.2 percent in July and accelerated to 2.9 percent for the 12-month period – the highest since February 2012.

Long, in a NAFCU Macro Data Flash report, highlighted that core inflation growth – which rose 2.3 percent year-over-year – was the fastest pace in a decade. Shelter costs accounted for nearly 60 percent of the monthly gains; growth was also supported by higher vehicle prices and a rebound in airline fares.

Energy prices decreased 0.5 percent in July following a 0.3 percent decrease in June. From a year ago, energy prices were up 11.9 percent.