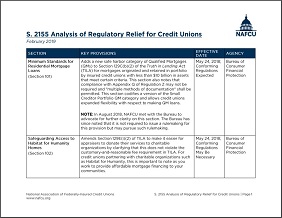 See how NAFCU and regulators are working to address credit unions' concerns and implement provisions of the Economic Growth, Regulatory Relief, and Consumer Protection Act (S. 2155) in an updated summary guide. NAFCU's highly used and downloaded guide details credit union-related provisions within the law, including their effective dates and other specifics.

This guide has been updated to reflect:

The 12-page table is available for download. NAFCU has also detailed the implications S. 2155 will have on credit unions in various posts on its NAFCU Compliance Blog.

NAFCU continues to work with policymakers on clarifications regarding S. 2155 compliance.