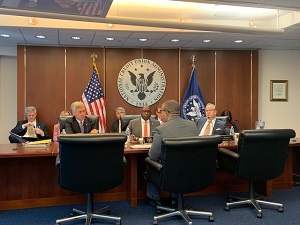 The NCUA Board Thursday unanimously approved two items during its meeting: A proposed rule to raise the current residential real estate appraisal threshold, and a final Interpretive Ruling and Policy Statement (IRPS), known as the Second Chance IRPS. Members of NAFCU's Executive and Regulatory Affairs teams, and the association's Board of Directors attended yesterday's meeting.

Under the proposed rule, the threshold for requiring a residential real estate appraisal would be increased from $250,000 to $400,000, providing parity with banks whose regulators issued a joint final ruling increasing the threshold in September.

"Over the years, credit unions have proven to be sound lenders, and they have not engaged in the same risky lending practices as banks," said NAFCU Director of Government Affairs Ann Kossachev. "The proposed rulemaking would help ensure credit unions receive parity with for-profit banks when it comes to residential real estate appraisals; they should not be placed at a disadvantage while also being the stronger, more member-centric lenders."

As finalized, IRPS expands the current de minimis conviction exceptions to include additional offenses and implements a new age-based exception to the filing requirement. NAFCU is generally supportive of the rule and appreciates the Board’s consideration of NAFCU’s concerns regarding increased fidelity bond insurance premiums and further explanation of the delegation authority for review of applications. NAFCU will continue to monitor whether the rule will have any future impact on fidelity bond coverage.

"The second chance final rule expands the list of exceptions to the application requirement, providing employment opportunities to those who pose no risk to the safety and soundness of the credit union system," said Board Chairman Rodney Hood on the rule's passage. "This adjustment is not only about regulatory relief, but also it is simply the right thing to do."

During the meeting, the board also received an update on the National Credit Union Share Insurance Fund (NCUSIF) quarterly report. NCUA Chief Financial Officer Rendell Jones reported that the fund posted a net income of $24 million in the third quarter of 2019, attributed to strong investment income earnings.

According to the bureau, the NCUSIF's net position was $16.7 billion at the end of the third quarter and the equity ratio was 1.33 percent. In May, more than 5,5000 credit unions received $160.1 million in equity distributions from the NCUSIF. This followed the agency's reporting of an equity ratio of 1.39 percent at the end of 2018, which was above the board-approved normal operating level (NOL) of 1.38 percent.

The board will next meet Dec. 12 for its last meeting of the year and is expected to finalize the  agency's proposed 2020-2021 budgets.