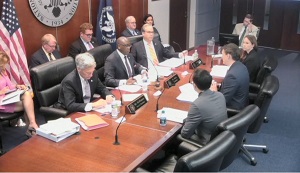 The NCUA Board yesterday unanimously approved a rule on fidelity bonds, despite acknowledging concerns raised in comment letters related to the cost, and in a 2-1 vote approved the NAFCU-supported final rule on real estate appraisals for non-residential, rural loans.

The board also approved a proposed interpretive ruling related to a section of the Federal Credit Union Act regarding convicted criminals. Chairman Rodney Hood indicated that the board intends to issue more rulings in regards to expanding career opportunities for those who "have paid their debt to society." Board members also received a midsession budget update.

Under the rule, set to take effect 90 days after publication in the Federal Register, the exemption threshold for appraisals for non-residential, rural real-estate-related financial transactions would increase from $250,000 to $1 million, among other reforms. During the meeting, Hood noted that the new rule aligns with his philosophy that rules should be effective but not excessive.

The board is expected to issue a proposed rule on residential real estate appraisals later this year.

"We appreciate the NCUA's efforts to address industry concerns and the revisions made to the fidelity bonds rule to reduce duplicity and regulatory burden for credit unions, " said Kossachev. "However, the final rule could ultimately translate into higher unnecessary costs. NAFCU will continue to work with the NCUA and hopes to find more opportunities for regulatory relief in the future."

The NCUA aims to address four objectives with the fidelity bonds rule; however, NAFCU believes that some of the changes made by the rule will actually increase credit unions' regulatory requirements.

The NCUA Board will not meet in August; its next meeting is scheduled for Sept. 19.