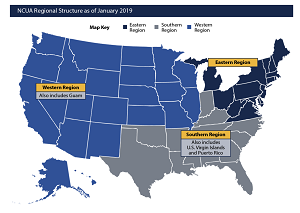 The NCUA's restructuring of its regional offices is now in full effect. These  changes, effective Jan. 1, reduced the agency's regional offices from five to three and the Albany (Region I) and Atlanta (Region III) offices have officially closed.

According to NCUA Board Chairman Mark McWatters, "The time has come for the NCUA business model to change." The changes were aimed at creating greater efficiency, responsiveness and cost-effectiveness at the agency.

Additionally, the NCUA's remaining three regions have been organized geographically instead of numerically. The current regional offices and the states they serve are as follows:

This planned restructuring was originally announced in July 2017.